Accessibility links
Saigon, The Last Day NPR Senior Foreign Editor Loren Jenkins was a reporter for Newsweek in Saigon when the city fell to the North Vietnamese in late April 1975. He recounts the chaotic final hours at the U.S. Embassy as the last Americans pulled out of Vietnam. 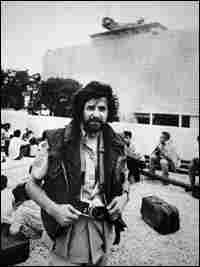 On the last day of the war, Loren Jenkins, who was then a reporter for Newsweek, stands at the U.S. Embassy in Saigon as an evacuation helicopter takes off from the roof. Nik Wheeler hide caption 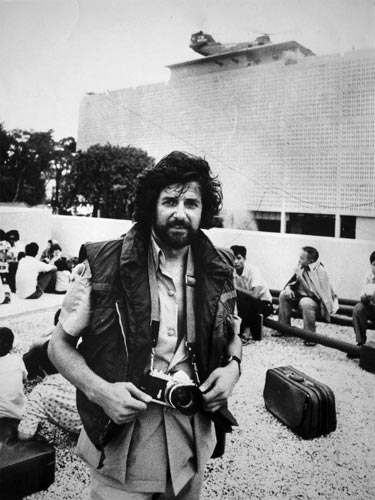 On the last day of the war, Loren Jenkins, who was then a reporter for Newsweek, stands at the U.S. Embassy in Saigon as an evacuation helicopter takes off from the roof.

NPR Senior Foreign Editor Loren Jenkins was a reporter for Newsweek in Saigon when the city fell to the North Vietnamese in late April 1975. He recounts the chaotic final hours at the U.S. Embassy as the last Americans pulled out of Vietnam.

What I remember 30 years distant of that last day in Vietnam was waking before dawn to muffled explosions and, in a groggy half-sleep, rolling onto the floor and pulling the mattress on top of me and dozing off again. The reaction was instinctive, a Pavlovian reflex to avoid any shattering glass should the explosions get nearer.

But then I awoke and realized the explosions were a softening-up barrage of artillery out at Ton Son Nhut airport. The North Vietnamese forces that had been rushing south for weeks with a tidal wave of refugees before them, had finally reached Saigon. After a decade, the war was at its end.

As the Vietnamese divisions had approached, there had been endless late-night discussions in the patio of the old Continental Palace Hotel where so many journalists stayed. Should we stay to record the final Vietnamese army takeover of the city we had so long lived in? Or should we follow U.S. Embassy plans to be sent by bus to Ton Son Nhut to catch the evacuation flights to Guam that had already been flying for weeks?

The U.S. evacuation plan was as dumb as the whole U.S. adventure in Vietnam had been. When the decision was made to finally pull the plug on South Vietnam, "White Christmas" was to be played on Armed Forces Radio. That would be the signal for the thousands of Americans still in Saigon to rush to appointed places around the city to wait for the buses that might pick them up and take them to Ton Son Nhut.

But as a reporter for Newsweek covering the last spasm of America's war in Vietnam, going to the airport to be jetted out while the city fell was the last thing I wanted to do. Instead, when President Ford ordered the evacuation of Saigon to begin because of the dawn attack on the airport, I chose to record the last minutes of the U.S. presence in Vietnam at the U.S. Embassy in downtown Saigon.

Girded by a 15-foot white concrete wall topped with coils of barbed wire, the six story-embassy building was a modern fortress soaring above the low-lying buildings that surrounded it. It was there that U.S. policy had been so long exercised, and it was here Ambassador Graham Martin would finally be making his last stand.

I remember meeting up with David Greenway of The Washington Post that last morning at the Continental Palace reception desk. Calmly peeling off a stack of soon-to-be-extinct Vietnamese piasters to pay his bill, he was muttering that no "gentleman" ever leaves his hotel bill unpaid!

We drove to the embassy in the Post's Toyota, which David abandoned, with the key in the ignition, on an abnormally traffic-less boulevard, littered with uniforms and boots of South Vietnamese soldiers who had already deserted. By the time we reached the embassy, the gates were shuttered and armed Marines were standing guard above the concrete walls as thousands of Vietnamese began to besiege the compound begging to be taken out with the Americans. We pushed through the mob somehow, showing U.S. passports and press cards at the gate. Someone opened it and let us slide in.

Inside was organized chaos. A motley assortment of Marine security guards, CIA agents and State Department volunteers roamed the grounds and manned the compound walls with an assortment of weapons that ranged from antiquated Tommy guns to hunting knives stuck in their belts. Thousands of desperate Vietnamese, screaming and begging, were trying to climb the walls and get through the coils of barbed wire, only to be pushed back into the street by none-too-gentle rifle butts.

The big tamarind tree that had shaded the ambassador's car had just been cut down and dragged to the side to turn the asphalted parking lot into a helipad. Beyond it, over by a swimming pool, hundreds of Vietnamese who had been let in because of past association and work with the Americans, were gathered amidst piles of suitcases, cardboard boxes and bundles of clothing. There were at least three South Vietnamese generals in uniform with their families, assorted Vietnamese politicians, a former mayor of Saigon, the city fire chief and a dozen of his men still wearing their back-flap firemen's helmets. Other Vietnamese had broken into the embassy cafeteria in search of cold drinks and whatever food they could forage.

From the building's top floors, where the top-secret stuff was stored, streamers of shredded documents cascaded out windows as if this were a ticker-tape parade. There was smoke from some offices where other documents were being burned and at one point three burly CIA agents in flack jackets wheeled a barrow full of crisp hundred dollar bills from their safe and dumped them into an outside incinerator that was belching smoke.

Then there was the clamor of helicopter rotors descending from the heavy, muggy blue sky. Big, gangly CH-46 Sea Knight helicopters from the 7th Fleet standing off in the South China Sea began arriving in relays -- one plumping itself down in the parking lot while a second would alight on the embassy roof. With engines idling and rotors swirling lazily, Marine crew chiefs rushed lines of waiting Vietnamese and Americans onboard. Then the engines would be revved, and the Sea Knight would lumber upwards, making room for the next.

It went that way all day and then into the night. The random chaos of the morning soon settled into a routine. Helicopters came and went. Lines of refugees, by now stoic and resigned, shuffled into the rear doors to be whisked away. And even the clamor of the panicked mob in the street outside seemed to have died with the sun.

Eventually, some 18 hours after the evacuation was launched, President Ford ordered it to end. The crews of the 80 helicopters, who flew 495 sorties, were exhausted. Night had long since fallen on the thinned-out embassy grounds and the word quietly spread that only the remaining Americans would be evacuated from the roof. The Marines on the walls retreated into the embassy building, the doors were barred, and those of us inside moved up toward the roof floor by floor.

Finally, around four in the morning, it was the ambassador's turn. He appeared on the roof with his immediate staff, silent and tired, clutching the embassy's folded flag under his arm. I joined his private secretary and his pet black poodle, Nitnoy, on one helicopter on the roof. The ambassador caught the next one out.

As his helicopter lifted off, the last view of the country he had run as an American viceroy was a giant celebratory fireworks display as the ammunition dumps at Bien Hoa to the north erupted… and a long line of truck lights stretching as far as the eye could see as the victorious North Vietnamese army drove south to victory.