Accessibility links
Technical Error Reveals Classified Info on Death of Italian Agent The U.S. military issued a report this weekend on the killing of an Italian intelligence agent in Iraq. Classified parts of the report were blacked out, but computer users were able to access sensitive information about U.S. military operations in an online version of the report.

The U.S. military issued a report this weekend on the killing of an Italian intelligence agent in Iraq. Classified parts of the report were blacked out, but computer users were able to access sensitive information about U.S. military operations in an online version of the report. 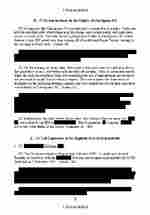 A page of the unclassified version of the report. NPR.org hide caption

We have one more story on Iraq this morning. The United States appears to have released more information than it intended about the killing of an Italian intelligence agent in Iraq. Over the weekend, the military issued an electronic version of a report on the killing. It describes the death of Nicola Calipari. He was killed at a US checkpoint in Baghdad while escorting a freed hostage. Classified parts of this report were blacked out, but computer users easily gained access to the full original report, which is full of sensitive information about US military operations. NPR's Vicky O'Hara has read the unclassified report and the classified version, and she joins us now.

INSKEEP: What did the military intend to put out and what did they really put out?

O'HARA: The report that they issued electronically on Saturday was 42 pages. It was put out in what's known as a PDF file in computer lingo, and there are significant portions of it--in some cases, it was names, in other cases it was whole paragraphs--that had been sort of slashed out, blacked out. And what happened is that people who had, you know, just basic computer training were able to take that file, transfer it to another program in which case all of the black slashes would disappear and the original appeared.

INSKEEP: Hmm. Now having read the entire report, do the blacked-out portions changed the basic conclusions that US investigators reached here?

O'HARA: No, it doesn't--they don't seem to. It substantiates what the US military's really been saying all along, which is that US soldiers opened fire on Nicola Calipari's vehicle because it was speeding towards them at a checkpoint on the road to the Baghdad airport. And as you recall, that's probably the most dangerous road in Iraq in terms of attacks by insurgents. And the report says the car failed to heed warnings to slow down, and American soldiers then fired on the vehicle. Two Italians who survived the attack tell a different story, and the Italian government, which did participate in this investigation, has refused to sign off on the conclusions.

INSKEEP: Now when you look at the full version of this report, there are a lot of little details about US military operations which we're not describing this morning, but are certainly in the hands of plenty of people. How damaging was this mistake to US security interests?

O'HARA: I would think it's fairly serious. At the lesser end of the scale, the names of the soldiers who were involved in the shooting attack on the Italian vehicle are revealed, which, you know, raises the possibility of some kind of retaliation. But probably more important from a national security perspective is that the report spells out exactly what the rules of engagement were for the soldiers at the checkpoint. That's something the military never want its enemies to know. It also assesses the training and vulnerabilities of US forces who were involved and procedures they normally follow. And it goes into a fair amount of detail on what the military knows about the insurgents' tactics. This is simply not the kind of information the military wants floating around the Internet.

INSKEEP: What have US military officials said about this?

O'HARA: Larry DiRita, who is the Pentagon spokesman, says that it apparently resulted from a technical error, and he says the military isn't sure how it happened. But he acknowledged that it is an unfortunate security breach in that it revealed procedural information about the military in Iraq to quite a large audience. He also made the point that the military normally would have released such a report in hard copy, but decided to put it out electronically because it's so dangerous for reporters to move around Baghdad to go pick it up.

INSKEEP: Hmm. One other thing, Vicky. The Italian public, of course, was outraged by this shooting. The Italians are releasing their own report on this today. Is there anything in the material you've seen that's likely to add to that dispute?

O'HARA: Only this. The report says that the scene of the shooting was contaminated in that vehicles had been moved before investigators could get there. And some of the vehicles were moved to open the airport road, others were moved to take the Italian survivors to the hospital.

INSKEEP: Vicky, thanks very much.