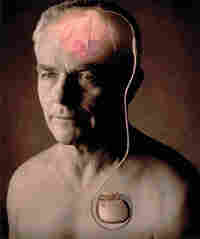 Wires threaded under the patient's scalp and neck skin are connected to a battery pack implanted below the collarbone. The pack delivers continuous electrical current at programmed settings and can be adjusted externally by placing a controller over it. Henry Ford Health System hide caption 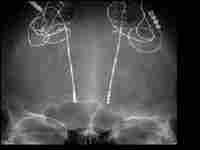 For about 10 percent of people with severe depression, no available treatments work -- not anti-depressant medicines, not psychotherapy, not even electroshock therapy. But now a revolutionary treatment that entails brain surgery shows preliminary promise in treating intractable depression.

Called deep brain stimulation, the experimental surgery involves the implanting of electrodes deep inside the brain to produce a constant, weak electrical stimulation to a target area in the brain -- called area 25 -- that plays a critical role in depression. By aiming a mild but constant electrical pulse directly into area 25, researchers think they can "recalibrate" the area back to normal functioning.

After surgery, the electrodes are left in area 25 and a wire is threaded out of the skull, under the skin and to the front of the chest. A tiny power pack beneath the skin controls the low-voltage electrical stimulation to area 25, and can be adjusted externally by placing a controller -- like a TV remote control -- over it. It's like a pacemaker for the depressed brain.

The surgery is still experimental -- the first one occurred in May 2003. Six patients underwent the procedure. After a few months, two did not improve, but the four others saw dramatic improvement.

"At six months, the four patients that responded to this treatment were actually near remission," said Dr. Helen Mayberg, who led the research while at the University of Toronto (she is now at Emory University). "Several of them were in remission -- meaning they weren't just better, they were well."

Mayberg and her colleagues reported their findings in "Deep Brain Stimulation for Treatment-Resistant Depression," an article published in the March 5, 2005, edition of the journal Neuron.

Read the Study in the Journal 'Neuron.'