Accessibility links
Educator Kenneth Clark and His Fight for Integration Social scientist and educator Kenneth Clark died Sunday in New York at age 90. Clark and his wife Mamie were the originators of the famous doll studies on the harmful effects of racism on black children, cited in the Supreme Court's landmark 1954 ruling in Brown v. Board of Education, which struck down segregation in public schools.

Listen
Educator Kenneth Clark and His Fight for Integration 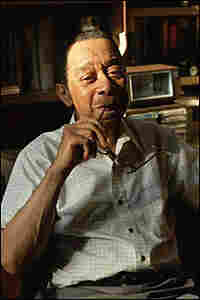 Kenneth Clark at his home in Yonkers in 1983. Corbis hide caption

Educator and psychologist Kenneth Clark died Sunday in New York at age 90. Clark and his wife Mamie were the originators of the famous doll studies on the harmful effects of racism on black children, cited in the Supreme Court's landmark 1954 ruling in Brown v. Board of Education.

Clark was a lifelong opponent of segregation in any form and died pessimistic that his vision of an integrated society would be achieved. Margot Adler has a remembrance.

The Psychology of the Ghetto

It is now generally understood that chronic and remediable social injustices corrode and damage the human personality, thereby robbing it of its effectiveness, of its creativity, if not its actual humanity. No matter how desperately one seeks to deny it, this simple fact persists and intrudes itself. It is the fuel of protests and revolts. Racial segregation, like all other forms of cruelty and tyranny, debases all human beings -- those who are its victims, those who victimize, and in quite subtle ways those who are merely accessories.

This human debasement can only be comprehended as a consequence of the society which spawns it. The victims of segregation do not initially desire to be segregated, they do not "prefer to be with their own people," in spite of the fact that this belief is commonly stated by those who are not themselves segregated. A most cruel and psychologically oppressive aspect and consequence of enforced segregation is that its victims can be made to accommodate to their victimized status and under certain circumstances to state that it is their desire to be set apart, or to agree that subjugation is not really detrimental but beneficial. The fact remains that exclusion, rejection, and a stigmatized status are not desired and are not voluntary states. Segregation is neither sought nor imposed by healthy or potentially healthy human beings.

Human beings who are forced to live under ghetto conditions and whose daily experience tells them that almost nowhere in society are they respected and granted the ordinary dignity and courtesy accorded to others will, as a matter of course, begin to doubt their own worth. Since every human being depends upon his cumulative experiences with others for clues as to how he should view and value himself, children who are consistently rejected understandably begin to question and doubt whether they, their family, and their group really deserve no more respect from the larger society than they receive. These doubts become the seeds of a pernicious self- and group-hatred, the Negro's complex and debilitating prejudice against himself.

Recalling Psychologist and Civil Rights Activist Kenneth Clark May 2, 2005
Doll Cultural Study Had Impact on 'Brown v. Board' Dec. 11, 2003
Looking Back: Brown v. Board of Education

With an Even Hand: Brown v. Board at Fifty (Library of Congress Exhibition)
Clark Testimony in 'Briggs v. Elliott'
Northside Center for Child Development