Accessibility links
Polygamists on Utah-Arizona Border Under Scrutiny For years, isolation kept the law away from the polygamous towns of Colorado City, Ariz., and Hildale, Utah. But now, Arizona and Utah officials are investigation allegations of young girls being forced to marry old men, sexual crimes against minors, domestic violence, welfare fraud and tax evasion. 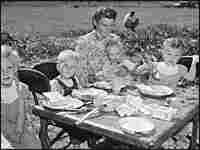 One of the many families displaced when Arizona authorities raided the polygamist town Short Creek (now called Colorado City) in 1953. Public sympathy for the families created a backlash, making authorities wary of action against polygamists for decades. © Bettmann/CORBIS hide caption 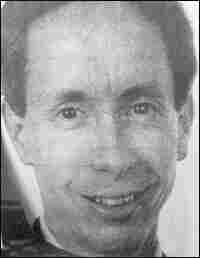 In 2002, Warren Jeffs succeeded his father Rulon as prophet of the FLDS. Jeffs is said to keep a tight grip on the polygamous community, using wives as rewards for loyalty among followers. NPR's Wade Goodwyn, Howard Berkes and Amy Walters write about the FLDS prophet: 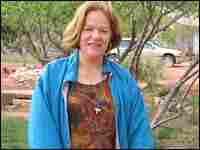 A former FLDS member, Pamela Black was a teen bride and spent 40 years in the church. She eventually left the church and now owns her own property just outside Hildale, Utah. Amy Walters, NPR hide caption

Warren Jeffs is the prophet of the FLDS. Hear excerpts of Jeffs preaching:

Hear Jeffs on the proper role of wives, whom he says should build up their husbands by being submissive.

Last week in Arizona, police and prosecutors from three states met behind closed doors to consider their response to one of the nation's largest groups of polygamists.

The FLDS Church, as it is known, has long dominated twin towns on the Utah-Arizona border and now has a new settlement outside a rural town in Texas. Most people in the sister communities of Hildale, Utah, and Colorado City, Ariz., believe salvation depends on each man having at least three wives and as many children as possible.

"I have never seen a community where there are families that have more love in them, more love for their children, and more order and organization," says Hildale Mayor David Zitting, an FLDS member. "There's no place in America, in any community, that has the type of situation like this community has."

In his book Under the Banner of Heaven, author Jon Krakauer examined the history of fundamentalist splinter groups that are not Mormon but derive their theology from Mormon teachings. The excerpt linked to below examines the history of the polygamous community of Colorado City, Ariz., which was formerly called Short Creek.

The community's polygamists derive their theology from early Mormon teachings. But they're not Mormons, and they're not welcome in the Mormon faith, which abandoned polygamy long ago.

Part 2 of This Report

The county seat for Hildale is 40 miles away. The county seat for Colorado City is a 300-mile drive. For years, the towns' isolation kept the law at bay. But now, Arizona and Utah authorities have put the towns under the microscope. They are investigating allegations of young girls being forced to marry much older men, sexual crimes against minors, domestic violence, welfare fraud and tax evasion.

State and local officials are also troubled by what appears to be an extreme mixing of church and state in the towns. School administrators are accused of padding the payroll with jobs for church members, though no charges have been filed. Local police are said to do the bidding of the church. Utah has revoked police authority for Hildale's police chief, and Arizona is considering the same move.

Presiding over the group is Warren Jeffs, the prophet to the FLDS faithful. Former members complain that Jeffs is authoritarian. Those who question the faith or its teachings are exiled, their property -- which technically belongs to the church -- taken from them. Jeffs is accused of exiling hundreds of boys and men; their wives and children are reassigned to other FLDS members.