Accessibility links
Mole Poblano de Guajolote This recipe is from The Complete Book of Mexican Cooking (Bantam Books) by Elisabeth Lambert Ortiz, one of the first cookbook writers to introduce the food of Latin America to the English-speaking world. It is not quite as time-consuming as some others. 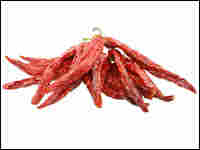 Dried peppers are blended with chocolate and spices in a mole. hide caption

This recipe is from The Complete Book of Mexican Cooking (Bantam Books) by Elisabeth Lambert Ortiz, one of the first cookbook writers to introduce the food of Latin America to the English-speaking world. It is not quite as time-consuming as some others. She does recommend lard. Your choice. -- Bonny Wolf

· Don't taste the sauce until all the ingredients are cooked and melded together. It only tastes good when it’s all together. Be patient.

· A number of ingredients are browned in oil before going into the sauce. Most Mexican cooks will tell you that lard is essential. It does give the sauce a distinctive taste. If that’s too scary, use canola oil.

· Mole poblano is traditionally served with turkey, but chicken and other meats can be substituted.

· Take the turkey (or other meat) off the bone when you combine it with the sauce. It makes eating a lot easier.

· Be creative. Vary the chiles, seeds, nuts according to taste.

· The dried chiles called for in mole recipes are available at Latino markets and at many supermarkets. If you can’t find the three chiles called for, use all anchos, which are easy to find.

· Some recipes call for unsweetened chocolate while others use the grainy Mexican chocolate (available at specialty markets and some supermarkets) that often is flavored with sugar, cinnamon and almonds. It’s, again, a matter of taste.

· As with many stewish foods, this dish only gets better with age.

· Use leftover mole to make enchiladas.

1 tortilla or 1 slice of toast, cut up

Wash the chiles in cold water. Remove veins, stems and seeds and tear them roughly into 1- to 2-inch pieces. Place in a bowl and soak them in hot water, about 1 cup to six chiles – about 2 ¼ cups – for about an hour.

Put the chiles and the water in which they’ve soaked in a blender or food processor and briefly blend. Don’t overblend or the mixture will lack character.

Cover the turkey pieces with salted water; bring to a boil and simmer 1 hour. Drain, reserving 2 cups of stock. Dry the pieces of turkey thoroughly with paper towels. Heat the lard in a skillet; then brown the turkey pieces in the hot fat, a few pieces at a time. Transfer to a large, flameproof casserole or dutch oven you can take to the table, reserving the lard. (I would then take the turkey meat off the bone.)

Combine the onions, garlic, almonds, raisins, cloves, cinnamon, coriander seeds, anise, 2 tablespoons of the sesame seeds, fresh coriander, tortilla or toast, prepared chiles and the tomatoes. Blend or process a small amount at a time to make a coarse puree. Heat the lard remaining in the skillet, adding, if necessary, enough fat to make about 3 tablespoons. Cook the puree in the hot fat for 5 minutes, stirring constantly. Add the 2 cups of turkey broth, the chocolate, salt and pepper to taste, and cook, stirring, over low heat until the chocolate has melted. The sauce should be quite thick – somewhat thicker than heavy cream. Pour the sauce over the turkey in the casserole and cook, covered, over the lowest possible heat for 30 minutes. Just before serving, sprinkle with the rest of the sesame seeds.