A new musical, The 25th Annual Putnam County Spelling Bee, opens this week on Broadway. Actual audience members are prescreened in order to take part in the show's spelling contest. 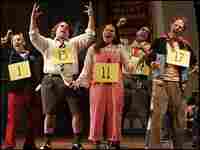 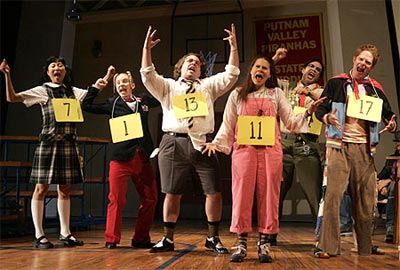 A scene from The 25th Annual Putnam County Spelling Bee.

People seem to love spelling bees. The National Spelling Bee is broadcast on ESPN and it draws national news coverage. Myla Goldberg had a best-seller with her novel "Bee Season," and the award-winning documentary film "Spellbound," which looked at the lives of bee participants, was a surprise commercial hit. This week, the subject makes it to Broadway in a new musical called "The 25th Annual Putnam County Spelling Bee." Jeff Lunden reports.

The idea started with Rebecca Feldman, who says she's watched a lot of national spelling bees.

Ms. REBECCA FELDMAN (Spelling Bee Viewer): It's sort of heartbreaking and inspiring, and it's riveting 'cause they're so genuine. These kids are so authentic and they have no filter to, like, show a different face other than what they really are. And it's such an awkward stage and so much pressure and they're under these bright lights and there's cameras pointing at them. And it's great theater.

LUNDEN: But that's because those are real kids up there struggling in a competition for which they've spent months, if not years, preparing. How could Feldman generate the same kind of empathy for actors playing pubescent kids battling for their lives and self-esteem? In her original production off-off-Broadway, which was called "C-R-E-P-U-S-C-U-L-E," she decided to bring audience members on stage to join the actors as contestants. That device has continued on Broadway where Tony Award winner James Lapine is directing the show. He says it really does break down the wall between the audience and the characters.

Mr. JAMES LAPINE (Director): My hope was to get the audience, like in any sporting event or competition, to root for someone to win. And you so want them to win. You so fall in love with them, even when they're not very likable at first. Somehow, they all win you over, and then it is sort of tragic when they don't go all the way.

LUNDEN: The task of finding the volunteer spellers falls to James Lapine's assistant, Darren Katz, and two others. They prescreen theatergoers a half-hour before each show.

Mr. DARREN KATZ (Assistant Director): We want people who are not involved in show business. We want someone who's going to be kind of like more of an average audience member, someone who's not going to be up there to try to steal the stage.

LUNDEN: But sometimes they do, says the show's originator, Rebecca Feldman.

Ms. FELDMAN: We already had a spelling bee kid who had been to the nationals. He came, like, dressed in the sort of nationals uniform, you know, the white shirt and the khaki pants and he was--I don't--maybe he was 13. He had glasses and he was a really good speller. And he actually surprised all of us. We kept him in way past anybody we'd ever kept in. And the audience loved him, ate him up.

LUNDEN: But Feldman says there's always a word you can find that people can't spell.

(Soundbite of a bell)

Unidentified Man: Well, you got the consonants right.

Unidentified Group: (Singing) Bye-bye. You are good but not good enough. So please don't ask why, simply say goodbye.

LUNDEN: In "C-R-E-P-U-S-C-U-L-E," videos told the back stories of the characters. In "The 25th Annual Putnam County Spelling Bee," the songs do that job. The music and lyrics are by William Finn, who wrote the Tony Award-winning score for "Falsettos." He says when he first saw the show off-off-Broadway, it was a brilliant sketch. But he wanted to tell a story, so he needed to deepen the characters. One of the first songs he wrote was "My Friend, the Dictionary."

Unidentified Girl: (Singing) I saved a chair for my dad in the fourth row on the aisle...

Mr. WILLIAM FINN (Songwriter): It's a girl who finds solace in words. Her family is not giving her the sort of attention she needs. The words in the dictionary are more her friends than the friends of hers at school. You know what? I kind of found that I knew the character and I knew that I could write the show.

Unidentified Girl: (Singing) And I live in a house where there's an oversized dictionary that I read as a girl on the toilet. I love my dictionary and I love the indented border. Every word's in alphabetical order, ergo lost things always can be found.

LUNDEN: Songwriter William Finn brought in Rachel Sheinkin to write a script to tie the characters' stories together. She drew on her own grade school spelling bee experiences.

Ms. RACHEL SHEINKIN (Writer): I remember it was the only time that I was chosen first for a team, and I was also amazed at how quickly kids would switch their allegiance. You'd be the kid waiting on bleachers in the gym class, but if you could spell, you're first on the team.

Unidentified Girl: (Singing) ...how wonderful it feels to stand so close to first.

Unidentified Girl: (Singing) I'll make it happen and not as previously reckoned 'cause I will not come in second...

LUNDEN: Some of the characters in "Putnam County" have survived from the original improvisational theater piece. Dan Fogler created the role of the antisocial nerd with a collapsed nasal passage, William Barfee. He spells lugubrious.

LUNDEN: All the creators say the "The 25th Annual Putnam County Spelling Bee" walks a fine line between making audiences laugh and creating characters that are real. Book writer Rachel Sheinkin says the subject gave all of them plenty to work with.

Ms. SHEINKIN: I think there's something about spelling bees where the kind of tension of your hopes and your fears and your goals are all exposed, and the goal is so absurd. And I think that's part of the reason we love it because it just kind of highlights the absurdity of all of our hopes and goals, and you just project it onto that moment. And I think it really allows us to laugh at ourselves as we're laughing with the characters and, of course, the language.

LUNDEN: So if you want to know the definition of phylactery, you can go to a dictionary or Broadway. For NPR News, I'm Jeff Lunden in New York.