Accessibility links
The Timeless Appeal of Coco Chanel Coco Chanel's legacy has been carried on by designer and devotee Karl Lagerfeld. An exhibit opening Thursday at New York's Metropolitan Museum of Art demonstrates how Lagerfeld has extended Chanel's vision. 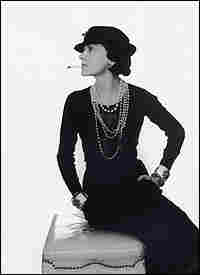 The designer Gabrielle "Coco" Chanel freed women's clothing from its old constraints... "the first [designer] to understand how a modern woman lived," as one fashion editor says.

The Chanel legacy -- capsulized in the little black dress -- has been carried on by designer Karl Lagerfeld, who took over the House of Chanel in 1983. An exhibition opening Thursday at the Metropolitan Museum of Art in New York demonstrates how Lagerfeld salutes and extends Chanel's vision.

During a preview of the show, Susan Stamberg noted how well Lagerfeld has built on a fashion vocabulary that remained consistent throughout Chanel's long career. She used soft tweeds, sewed braid along the edge of jackets, put white fabric camillias on lapels, made purses of quilted leather and blackened the toes of her beige sling-back shoes. All her designs were created on living models, not sketch pads... and all were done, as Stamberg says, "in a mist of Chanel No. 5, still the world's top-selling perfume."

Lagerfeld has continued Chanel's famous wearability while updating some of her ideas. For instance, a daysuit created two years ago with a typical Chanel cardigan jacket, outlined at the neck and waistline, of wool boucle in ivory and beige, with shots of coral. The lining is silk. The real Lagerfeld part: the illusion of unraveling wool, laced with color, at the skirt and cuffs.

The Chanel exhibit continues at the Costume Institute of the Metropolitan Museum of Art in New York through August.