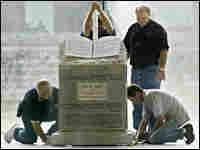 Workers remove a monument of the Ten Commandments from the Alabama Judicial Building, from where former Superior Court Justice Roy Moore had refused to take it down, August 2003. Moore is currently on tour across America with the monument. Reuters/Corbis hide caption

As president of a group called Wall Builders, David Barton is at the forefront of the Christian heritage movement. He says with few exceptions, the founders spoke openly of their protestant Christian faith and many, including John Adams, Benjamin Rush and John Jay, wrote that American freedom was based on Christian principles.

When in the Course of human events, it becomes necessary for one people to dissolve the political bands which have connected them with another, and to assume among the powers of the earth, the separate and equal station to which the Laws of Nature and of Nature's God entitle them, a decent respect to the opinions of mankind requires that they should declare the causes which impel them to the separation.

We hold these truths to be self-evident, that all men are created equal, that they are endowed by their Creator with certain unalienable Rights, that among these are Life, Liberty and the pursuit of Happiness...

Robert George, a political scientist at Princeton University, disagrees with this overtly Protestant reading of history. But he says this movement is tapping into an expanding sentiment across America, a longing for a culturally simpler time. Americans radically disagree on fundamental questions of life, abortion, euthanasia and even the definition of marriage.

Congress shall make no law respecting an establishment of religion, or prohibiting the free exercise thereof; or abridging the freedom of speech, or of the press; or the right of the people peaceably to assemble, and to petition the Government for a redress of grievances.

Links to the U.S. Constitution, Declaration of Independence and Bill of Rights are available at the Library of Congress' Web site:

Web Extra: What the Founding Fathers Had to Say

Is the United States a Christian nation? Some Christian conservatives say yes, arguing that the Founding Fathers were guided by their faith. Opponents argue that the nation's founders sought to prevent the domination of Christianity in the public arena. Below, a look at some of the historical writings cited by the two sides in the debate:

In Favor of Religion in Public Life:

"[I]t is religion and morality alone which can establish the principles upon which freedom can securely stand. The only foundation of a free constitution is pure virtue." -- John Adams (letter to cousin Zabdiel Adams, June 21, 1776)

"While just government protects all in their religious rights, true religion affords to government its surest support." -- George Washington (address to the Synod of the Dutch Reformed Church in North America, October 9, 1789)

"[O]ur citizens should early understand that the genuine source of correct republican principles is the Bible, particularly the New Testament, or the Christian religion." -- Noah Webster, author of the first American dictionary (writing in History of the United States, 1832)

"Our liberty depends on our education, our laws, and habits… it is founded on morals and religion, whose authority reigns in the heart, and on the influence all these produce on public opinion before that opinion governs rulers." -- Fisher Ames, Federalist party leader (An Oration on the Sublime Virtues of General George Washington, 1800)

"[T]he… law established by the Creator… extends over the whole globe, is everywhere and at all times binding upon mankind… [This] is the law of God by which he makes his way known to man and is paramount to all human control." -- Rufus King, signer of the Constitution (letter to C. Gore, February 17, 1820)

"I concur with the author in considering the moral precepts of Jesus as more pure, correct, and sublime than those of ancient philosophers." -- Thomas Jefferson (letter to Edward Dowse, April 19, 1803)

"The only foundation for a useful education in a republic is to be laid in religion. Without this there can be no virtue, and without virtue there can be no liberty, and liberty is the object and life of all republican governments." -- Benjamin Rush, signer of the Declaration of Independence (Of the Mode of Education Proper in a Republic, 1798)

Against Religion in Public Life:

"Nothing is more dreaded than the national government meddling with religion." -- John Adams (letter to Benjamin Rush, June 12, 1812)

"[T]he number, the industry, and the morality of the Priesthood, & the devotion of the people have been manifestly increased by the total separation of the Church from the State." -- James Madison (letter to Robert Walsh, March 2, 1819)

"Believing with you that religion is a matter which lies solely between Man & his God, that he owes account to none other for his faith or his worship, that the legitimate powers of government reach actions only, & not opinions, I contemplate with sovereign reverence that act of the whole American people which declared that their legislature should 'make no law respecting an establishment of religion, or prohibiting the free exercise thereof,' thus building a wall of separation between Church & State." -- Thomas Jefferson (letter to the Danbury, Conn. Baptist Association, January 1, 1802)

"The Citizens of the United States of America have a right to applaud themselves for having given to mankind examples of an enlarged and liberal policy: a policy worthy of imitation. All possess alike liberty of conscience and immunities of citizenship. It is now no more that toleration is spoken of, as if it was by the indulgence of one class of people, that another enjoyed the exercise of their inherent national gifts. For happily the Government of the United States, which gives to bigotry no sanction, to persecution no assistance, requires only that they who live under its protection should demean themselves as good citizens, in giving it on all occasions their effectual support." -- George Washington (letter to the Hebrew Congregation of Newport, RI, August 18, 1790)

"The Constitution of the U.S. forbids everything like an establishment of a national religion." -- James Madison (Detached Memoranda, ca. 1817)

"We should begin by setting conscience free. When all men of all religions… shall enjoy equal liberty, property, and an equal chance for honors and power… we may expect that improvements will be made in the human character and the state of society." -- John Adams (letter to Dr. Price, April 8, 1785)

"As to religion, I hold it to be the indispensable duty of government to protect all conscientious protesters thereof, and I know of no other business government has to do therewith." -- Thomas Paine (Common Sense, 1776)