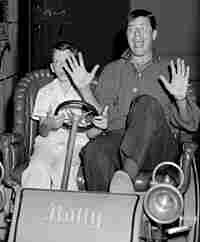 Disneyland turns 50 this year, and the world's first theme park has already begun what it bills as the "happiest homecoming on Earth." 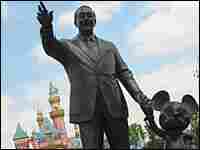 Over the decades, pioneering animator Walt Disney's family-oriented park has become an American icon, inspiring spin-offs in Florida, Europe and, coming soon, in Hong Kong. As Mandalit del Barco reports, Disneyland has a lively history and a devoted worldwide following -- and they know how to throw a good party. 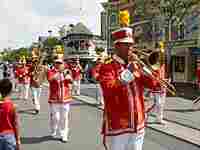 Walt Disney built the entire first phase of the park in just one year, on what used to be an orange grove. The trees gave Orange County its name, but today there are few reminders of that agricultural past -- Disneyland has expanded to become a city unto itself, with new hotels and resorts and even a separate theme park with a California theme. 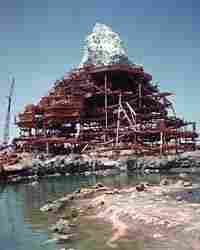 The Matterhorn ride rises above what once was an orange grove in the then-sleepy Los Angeles suburb of Anaheim. The "mountain" stands 147 feet tall, about 1/100th the size of the actual Swiss mountain. Walt Disney Corporation hide caption

In front of live television cameras in a special hosted by then-actor Ronald Reagan, Disney opened the park to an over-capacity crowd on July 17, 1955. He dedicated his dreamed-up land to families, to enjoy together.

He didn't find out until later was that opening day was something of a fiasco -- 15,000 guests were invited, but those tickets were counterfeited and an estimated 30,000 actually showed up. Women in high heels had to be rescued when their shoes sank into freshly poured concrete. Some of the rides broke down, and a plumber's strike forced Disney himself to pitch in to finish drinking fountains and bathrooms.

Since then, the park has become a cultural touchstone to its many fans -- and a target for its detractors. People meet and get married at the park, but it's also been the scene of gang fights and even a tornado.

And then there's Yippie Day. In August 1970, political activists decided to take over the park. The plan was to invade Tom Sawyer Island and "liberate Minnie Mouse," among other pranks. A few hundred Yippies managed to unfurl a marijuana flag on the island, and the day finally ended with police in riot gear arrested some of the protesters.

Some of Disneyland's attractions now seem a little dated, and others may have overstayed their welcome -- Captain Eo, anyone? -- but new rides are always on the drawing board to keep up with the times. This week, Disney Corporation CEO Michael Eisner unveiled the park's newest attraction: Buzz Lightyear Astro Blasters.

Disneyland to Celebrate 50 Years May 1, 2005
The Marketplace Report: Disney Profits Could Help Eisner May 13, 2004