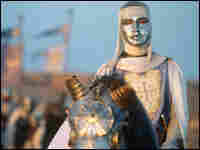 During his long career, Ridley Scott directed a movie set in the future, "Blade Runner," and an epic set in the distant past, "Gladiator." Now Scott turns his attention to the Crusades in his new film "Kingdom of Heaven." Here's Los Angeles Times and MORNING EDITION film critic Ken Turan.

Ridley Scott is not what you would call a political animal, but in "Kingdom of Heaven" he uses big-name actors like Orlando Bloom, Liam Neeson and Jeremy Irons to make that rare blockbuster that manages to have something relevant to say. Scott did not necessarily set out to do that. He wanted an action-adventure film that would be able to repay its multimillion-dollar budget. He's done that--provided huge battles, speculator vistas and slash-and-burn action. But given the times the film was made in, it's inevitable that it's something more.

(Soundbite of "Kingdom of Heaven")

Mr. ORLANDO BLOOM: (As Balian) It has fallen to us to defend Jerusalem, and we have made our preparations as well as they can be made. None of us took this city from Muslims. No Muslim of the great army now coming against us was born when this city was lost. We fight over an offense we did not give.

TURAN: "Kingdom of Heaven" is not one of those cheerful combat movies that believe bloodletting is the answer to everything. It is a violent movie that laments a brief peace between the Christians and Islam that didn't last. It's a somber but compelling epic that seems to have lost faith in the value of savagery for its own sake. "Kingdom of Heaven" follows a young, French blacksmith named Balian, played by Bloom, who goes to Jerusalem for several reasons, not the least of which is concern for his soul. He allies himself with the crusader king who is trying to restrain religious zealots, just as the Muslim leader Saladin is trying to hold off fanatics in his own camp. It is, inevitably, a losing battle.

(Soundbite of "Kingdom of Heaven")

Mr. JEREMY IRONS: (As Tiberias) When will it begin?

TURAN: The star of "Kingdom of Heaven" is not the script or any of the actors: It is the director's unmatched gift for the visual. Shooting in Morocco and Spain, Scott has done the hardest thing a historical epic can do. He's made his film look as real as it is exotic. Scott and his experienced production team have gotten so good as their historical re-creations that they give them an offhanded quality, making them spectacular without seeming to be showing off. No matter what we're looking at, we're thinking, `It must have looked like that.' A better compliment for "Kingdom of Heaven" would be hard to find.