Accessibility links
Linda Ellerbee, Taking 'Big Bites' Linda Ellerbee, self-described "recovering journalist," has written a memoir that's also a bit of a travel guide. And it's about food, too. Ellerbee's new book is Take Big Bites: Adventures Around the World and Across the Table. 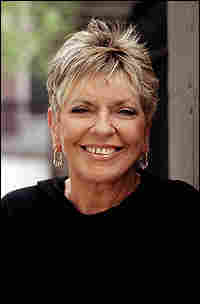 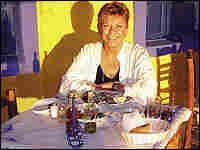 Linda Ellerbee, in a detail from the cover of her new book on traveling... and eating. hide caption

Linda Ellerbee, a self-described "recovering journalist," has written a memoir that's also a bit of a travel guide. And it's about food, too. The book is Take Big Bites: Adventures Around the World and Across the Table.

Ellerbee prefers to travel alone, without a set itinerary. She says that as a result, she can open herself up to new experiences, new people and new food. Ellerbee, formerly with CBS and NBC, is now executive producer of Nick News.

From the Introduction to Take Big Bites:

I'm not crazy about Florence except for the pig museum. If, precisely speaking, it's not a museum, that's only because some fool in the Italian government doesn’t recognize a national treasure when he sees one.

Out front there is a brown table covered by a red-checked tablecloth. Three once-living, now-stuffed pigs sit on little wooden chairs, red-checkered napkins tied around their throats, real knives and forks tied to their hooves. In their glasses is real red wine. On their plates is more dead pig. Enough to make a decent docent sit up and take notice, wouldn't you think? Or perhaps you think an embalmed sidewalk salute to anthropomorphic cannibalism is in bad taste? I say it's art and I much prefer it to the Uffizi; they don't let you eat the paintings, whereas the three little pigs are gatekeepers to the world's most perfect pig meat. They are also the only way I find the shop, which is the second best thing about Florence: It's easy to lose your way. I go the distance, nodding briefly to this statue and that church, following narrow streets that meet themselves coming back, stopping to ask directions of people as lost as I am -- constantly flirting with personal failure and public humiliation on foreign soil-simply because I like to eat pig and because I like adventure, by definition an undertaking of uncertain outcome.

Another way to look at it is that adventure is to take big bites of elsewhere. I believe in elsewhere. I believe in taking big bites. Therein lies a book. I hope. Be warned. I'm not a food or travel writer. I'm not a chef. There is no show on the Food Network called Essence of Ellerbee. There are no books anywhere called Linda Jane's Guide to somewhere. What I am is a recovering journalist who's traveled and eaten her way around the planet and lived to tell some tales. A few have little to do with food and only indirectly with travel, but all make up that portable library I pack without regard to weight: Memory.

Adventures around the world, across the table -- and from the heart. There's a connection. A memory of a different place, an unfamiliar taste, an old friend, a new love -- the root word is passion. I carry mine with and inevitably on me. Eat this plate of pomme frites or just go ahead and paste them on my hips? I like to think I make the right choice. Pasting potatoes directly on your person probably calls for Krazy Glue. I have a bad record with Krazy Glue. What the hell, I like to eat. I like to travel. I like to talk about both. A starter set: I don't like Singapore, Brunei or Gibraltar. I'm conflicted about Turkey and turkey. I don't like nuts in sweet things or tomatoes on any sandwich but a tomato sandwich. I like to prepare and share food with friends and family as much as I like sitting all by myself at a café some place where I don't speak the language.

There's more: What it is to be eighteen, working as a missionary in Bolivia, eating strange foods seasoned with hypocrisy; how Thai chicken tastes on a rain-scored ledge at the bottom of the Grand Canyon after you've flipped your raft in the Colorado River; how chile con queso changed the course of American education; where in the world -- and you will not, I swear, guess the answer -- you go to find the best fried egg sandwich; how to escape one's captors in occupied Afghanistan in order to pursue mutton on the streets of Kabul; why I decided to move to Da Nang in the first place; how a ham-and-cheese sandwich in Malaga could possibly cost $500; what Elvis had to do with the Big-Hatted Baroness and the only three-star Michelin restaurant in southern Italy; why every everybody should spend one month a year alone on an island far, far away; who you meet and what you eat when you spend your birthdays alone in the wilderness, and how I came to follow the River Thames on foot, from its source to the sea, to celebrate turning 60. Or in denial of it.

My first food adventure was colored by a tiny misunderstanding. It wasn't my fault. Nobody mentioned anything about taking the plastic cover off the TV dinner before you put it in the oven. It's not that I didn't grow up eating real food. It's that when I was growing up real food was briefly extinct. Blame the Nazis. If America hadn't gone to war, a man named Birdseye wouldn't have figured out he could preserve food for our troops by flash freezing it in cold water. After years spent shelling peas, stringing beans, cutting the corn off the cob, peeling this and slicing that and then cooking everything -- in a big pot of water with a big a piece of pork -- until Tuesday, my mother thought Mr. Birdseye was a saint. She was not alone. Convenience food became the mantra of post-war motherhood. I understand. Preparing real food was and is more work. But it tastes better. Around our house, when not infected by the Birdseye plague, real food often meant chicken-fried steak with mashed potatoes and cream gravy, sugar peas, field peas, black-eyed peas, lima beans, green beans, all greens, ambrosia, okra, corn, tomato aspic, squash casseroles, pot roast, fried fish, chicken and dumplings, hot rolls, biscuits, cornbread, cakes, pies, fudge, divinity and Mama's homemade vegetable soup, which was world famous in our family. Labor-intensive stuff. But when I would ask to help, Mama would say, "Oh Linda Jane, it's easier to do it myself."

I hung around anyway. Willie Pearl Ellison, the African-American woman who worked for our family from the time I was an infant -- a saintly human and my constant ally against my mother -- let me help her in the kitchen when Mama was off playing bridge or having her hems shortened, or lengthened. When she made apple pies, Willie Pearl would give me pieces of dough and fruit to make a pie in my own little pie tin (when she made chocolate pies I ate the filling before I could make my pie). Willie Pearl also taught me how to do the dirty bop, which for some years was more useful than knowing how to make an apple pie.

If it was Mama who did her best to keep me from cooking, it was Daddy who gave me the idea that a foot in the road was not a bad place for a foot to be. He took me with him on business trips to other towns in Texas. Early in the morning, we would go walking and he would tell me about where we were; why New Braunfels had been settled by Germans, how the dome of the Texas Capitol came to be fourteen feet taller than the dome of the U.S. Capitol, how to read a street map and when to throw one away. He took me to a mill in Lubbock. I watched cotton bolls become thread. He took me on a fishing trip to Eagle Lake. I learned how to bait my own hook and not squeal when I caught a fish. In Galveston, he taught me to hear the sea in a shell. Everywhere we went, Daddy talked to people. When I was in high school, Daddy came home from a business trip to Missouri and told us that on his early morning ramble he had run into a fellow he knew, but had never met. My father said he had offered his hand to the familiar stranger.

The man shook my father's hand. Daddy said he had a good shake.

"I’m Harry Truman from Independence, although I was born in Lamar, Missouri."

"What a coincidence. Lamar is the name of my daughter's school. Named after the second president of the Texas Republic. Don't suppose your town was, though. How did it come by the name Lamar?"

My father and a former President of the United States stood on a street corner and talked for 30 minutes. The world was a curious place, Daddy said. I should go see for myself. 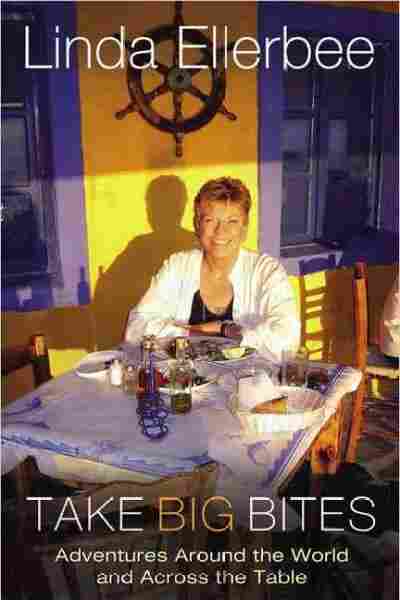 Adventures Around The World And Across The Table