Accessibility links
Strong Bad Walks in Footsteps of Darth, Lex, J.R. There are lots of nasty characters lurking in the shadowy corners of the Internet. But Strong Bad is just awful. And he's awfully funny, too, as he assails Marzipan and Homestar Runner. Goofy humor is the hallmark of the Web site Homestarrunner.com. 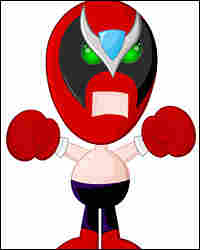 The villain Strong Bad has emerged as a main focus of the Homestar Runner site. hide caption 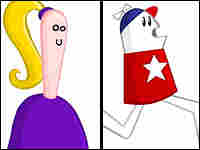 There are lots of nasty characters lurking in the shadowy corners of the World Wide Web. But Strong Bad is just awful. And he's awfully funny, too.

Strong Bad sports a Mexican wrestler's mask and wears boxing gloves all the time. He's the bane of Homestar Runner's existence. And who is Homestar? He's a slightly dim high school jock with a bowling-pin-shaped girlfriend named Marzipan.

Did we say bowling-pin-shaped? Yes, because Strong Bad, Homestar and Marzipan are all cartoon characters residing at homestarrunner.com, a flash-animation Web site created by brothers Mike and Matt Chapman. Out of their basement. The site is visited by more than a million viewers a month, and updated weekly, as John Ydstie found out in a visit with the Chapman brothers.

Homestarrunner.com may remind some of the foul-mouthed animated TV comedy South Park, which also draws its charm from cleverly executed bad animation and irresistably amateurish voices. But these toons are mostly G-rated, and more interested in goofball humor than gross-out comedy. So it attracts a lot of younger fans.

Parents will want to take a look to make sure it's right for their youngsters, but they are likely to find themselves equally amused.