Accessibility links
Funds Lacking to Restore Iraqi Jewish Archives In 2003, U.S. forces discovered a cache of documents and sacred texts that had belonged to Iraq's once-thriving Jewish community in a flooded basement of Saddam Hussein's secret police. The records were transported to the U.S., where efforts to restore them are stalled by a shortage of funds.

In 2003, U.S. forces discovered a cache of documents and sacred texts that had belonged to Iraq's once-thriving Jewish community in a flooded basement of Saddam Hussein's secret police. The records were transported to the U.S., where efforts to restore them are stalled by a shortage of funds. 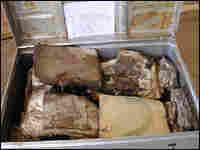 A trunk holds books and documents recording the life of Iraq's Jewish community that were frozen to slow further deterioration. Mold on the documents is so toxic that conservators must wear protective suits when removing it. Courtesy National Archives and Records Administration hide caption

Shortly after the invasion of Iraq in 2003, US forces stumbled on a strange cache of documents in the basement of the Iraqi secret police building. They turned out to be documents and sacred texts that had belonged to Iraq's once-thriving Jewish community. Now the records have been taken to a national archives facility in Maryland to be restored. As NPR's Larry Abramson reports, that effort has been stalled by a shortage of funds.

Two years ago Doris Hamburg of the National Archives in Washington, DC, received an unusual distress call. It came by e-mail from Baghdad.

Ms. DORIS HAMBURG (National Archives): Asking about how to take care of some books and documents that had become waterlogged and what was the best next steps.

ABRAMSON: It seems that US troops in Baghdad had found a hoard of documents floating in about three feet of water in the basement of Saddam's secret police headquarters. The building had been damaged in the fighting. The documents were in Arabic and Hebrew and appeared to record the life of Iraq's Jewish community. Hamburg knew immediately that heat and humidity would produce a preservationist's worst enemy: mold.

Ms. HAMBURG: So it was very important, if at all possible, to get the temperature down as much as they could and, if possible, to freeze it.

ABRAMSON: You could almost hear the Americans in Baghdad saying, `Yeah, right, freeze 27 chests full of soggy papers in a war zone in the desert.' But thanks to some very American ingenuity, a freezer truck was found, the trunks of papers were put inside, and Doris Hamburg was soon on her way to Baghdad to see what should be done next. Hamburg and her colleagues packed lots of special tools for restoring soggy texts. But when she got to Iraq and climbed into that freezer truck, Hamburg knew the papers needed intensive care that she could not deliver.

Ms. HAMBURG: Freezing stabilizes the situation and stops the mold from growing and stops damage from the water. It isn't a permanent solution, and the next step after something is frozen is to dry it out.

ABRAMSON: And the only way to do that was to freeze-dry them, which could not be done in post-war Iraq. So the trunks were brought to Texas, where a company that deals in catastrophic damage drew that water out in a special chamber.

ABRAMSON: The mold is so toxic, conservators must wear a mask and gloves when removing it.

Ms. ALLISON OLSON (Preservationist): This is one of our conservation labs...

ABRAMSON: This facility has a special relationship to time. Preservationist Allison Olson is delivering the final touches to records from the 19th century, which the US received after buying the Virgin Islands from the Danish in 1917.

Ms. OLSON: They have mold damage and insect damage probably prior to coming to the US. And initially they were all vacuumed to remove the mold spores, and now I'm going through and mending the tears that go through the text.

ABRAMSON: This beautiful building is like an exclusive spa for old, tired texts, but it's usually reserved for documents owned by the federal government. Limited private funds have paid for the initial work on the Jewish archive. A lot more money will have to be raised to remove all the mold, repair and microfilm these documents so they can be studied.

In March, the Archives invited Peter Geffen of the Center for Jewish History in New York to take a peek in the hopes that he would help raise that money. He was moved by what he saw.

Mr. PETER GEFFEN (Center for Jewish History): Yes, we saw the Torah scroll and an awareness that quickly set in that these materials, in many ways, are amongst the last remaining documents and books of a community that is probably the oldest Jewish community in the world.

ABRAMSON: The size of the Jewish community in Baghdad is one measure of its importance. Jews played an important role throughout the history of the area right through the Second World War.

ABRAMSON: Filmmaker Carol Basri has chronicled the history of Jews is Iraq. She says the founding of the state of Israel in 1948 led to tough anti-Jewish laws, laws that helped speed the destruction of any records of Jewish life in Baghdad.

Ms. BASRI: The people who left at that time were limited to only taking clothing, 50 pounds. They were not allowed to take photographs or books or family heirlooms. So actually there is a dearth of photographs, there's a dearth of material, even prayer books of the community.

ABRAMSON: With the rise of the Baath regime in the 1960s, anti-Jewish repression grew, peaking in the hanging of 11 Jews in a public square in 1968. Many Jews emigrated after that. Today there are believed to be only a couple of dozen Jews left in Iraq.

No one can know exactly what's in the archive found in Iraq until the papers have been restored and studied. Some documents may be routine records of everyday life, but Peter Geffen says they are all important.

Mr. GEPHEN: These books, being amongst the last of that historic community, have an emotional and nostalgic value, even if they do not have a great historical value in the sense that they might end up in a rare book room or something of that kind.

ABRAMSON: Archive staff say these documents are seen as property of the Iraqi Ministry of Culture and will likely be returned once the money is raised to rescue them. Full restoration of the archive is estimated to cost about $3 million. Larry Abramson, NPR News, Washington.