Accessibility links
The Search for Tamika Huston In the wake of the media frenzy over the "runaway bride" saga, Allison Keyes reports on the story of Tamika Huston, the African-American woman who's been missing from her home in South Carolina for the past year. Is race an issue in how each case was handled?

Listen
The Search for Tamika Huston

In the wake of the media frenzy over the "runaway bride" saga, Allison Keyes reports on the story of Tamika Huston, the African-American woman who's been missing from her home in South Carolina for the past year. Is race an issue in how each case was handled? 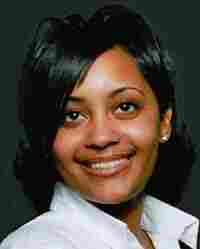 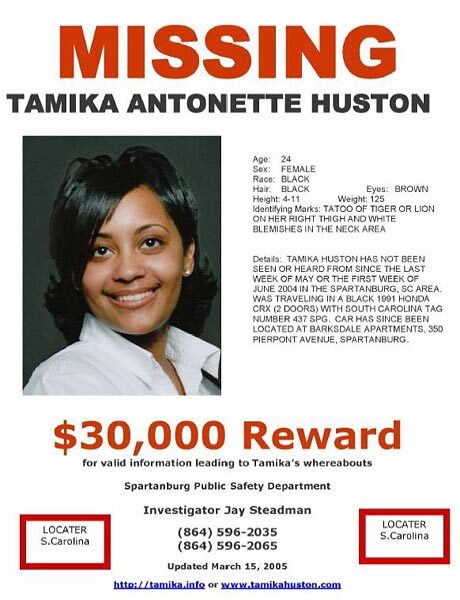 From NPR News, this is NEWS & NOTES. I'm Ed Gordon.

Nearly two weeks after her return, runaway bride Jennifer Wilbanks is still in the headlines. Other missing women like Lori Hacking and Laci Peterson also captured the national spotlight. But not all such cases receive national coverage. NPR's Allison Keyes reports on one African-American woman who disappeared nearly a year ago in South Carolina and has received little attention.

Twenty-four-year-old Tamika Huston lived in a small white frame house on Harvard Drive in Spartanburg. In her pictures, the nutmeg-colored woman's eyes sparkle and her smiles are wide and friendly. No one has seen her since last May 24th. Tamika's aunt, Rebkah Howard, says not knowing what happened to her has been difficult to bear.

Ms. REBKAH HOWARD (Missing Woman's Aunt): I miss her so much. She's just such a wonderful, warm person and her absence from our lives has just left an incredible void. We miss her terribly.

KEYES: Tamika lived alone in the house she owned and had just quit a job as a waitress. She was also known to jump in her car and visit relatives spread along the Eastern seaboard, so Howard didn't worry at first when Tamika's ex-boyfriend called to say that no one had seen her around.

Ms. HOWARD: I just assumed, `Oh, well, you know, I know I haven't spoken to her in a couple weeks, but almost certainly her mom did.' And once it became apparent by the next day that no one had heard from her, we became very alarmed.

Lieutenant STEVE LAMB (Spartanburg Public Safety Department): Our investigators actually made forced entry into the residence. Tamika was not there. She had a dog who'd just had puppies. We felt like the dog had been by itself for several days, possibly several weeks.

KEYES: On June 20th, Tamika's 1991 black Honda was found abandoned, and police had received a 911 call just before Tamika vanished that investigators thought might be connected to the case.

Unidentified Man #1: My brother just came to my house and told me that he killed his girlfriend and put her in Cleveland Park Lake.

KEYES: A search of the lake found nothing. Then in January, police got a tip that led them to execute a search warrant at an apartment complex in Spartanburg. Again, Lieutenant Lamb.

Lt. LAMB: We did find blood in that apartment, and that DNA did match back to Tamika.

KEYES: Lamb says the person who lived there during that period was dating Tamika around the time she disappeared. He is in custody right now on a parole violation unrelated to this case, but so far, no charges have been filed. Lamb says police consider him to be a person of interest and are continuing their investigation.

KEYES: At RJ's Grill, a diner a few blocks away from Tamika's house, two waitresses said they talk about the case all the time. Twenty-nine-year-old Suzanne Davis noticed that runaway bride Jennifer Wilbanks got much more attention from the media than Tamika's case has. She thinks money is the reason why.

Ms. SUZANNE DAVIS (Waitress): The runaway bride was from a rich family, from a well-to-do neighborhood, and this girl is just from a--just regular neighborhood. I mean, I guess her family's not well-to-do enough.

MIKE (Spartanburg Resident): We took one little affluent white girl and here we go again, folks. They make her important, and that's what the media's telling us. But Tamika Huston, a little pretty black girl right here in town, hard-working, she's missing. She could be dead. No one knows.

Ms. KELLY JOLKOWSKI (Project Jason): I think that we all know that the coverage is not balanced.

KEYES: Kelly Jolkowski founded the Omaha, Nebraska-based Project Jason Web site after her own son vanished in 2001. Tamika's face and bio are among those featured, and Jolkowski has been supporting her family. She says she knows not all missing-person cases can get coverage, but she also thinks the media ignores some cases, like that of her son.

Ms. JOLKOWSKI: I've never seen, in national coverage, a male, and I have never seen a minority. So that is some of what we're out there doing is we're fighting for these people.

KEYES: Howard, Tamika's aunt, works in public relations and says she knew how important it would be to get her niece's name and face out there as quickly as possible. But getting national coverage, she says, was an uphill battle. Only BET and "America's Most Wanted" have joined Spartanburg's media in covering the case. Howard thinks the issue is both race and class.

Ms. HOWARD: I don't think it's a conscious effort on behalf of network producers and executives to exclude certain people. I just think that the bottom line, television news is a business and I think that they have found a formula that works for them, and that formula is young, attractive, white, middle- to upper-class missing woman.

KEYES: Howard says now the family is beginning to hear from national media organizations. But she thinks if Tamika's case had gotten attention earlier, perhaps the family would have been spared a year-long ordeal. Allison Keyes, NPR News.