Accessibility links
Debating Medicaid and Morality in Missouri In Missouri, plans to pare 90,000 people from the Medicaid rolls in 2005 have sparked a fierce debate over the morality of the move. Frank Morris of member station KCUR in Kansas City reports. 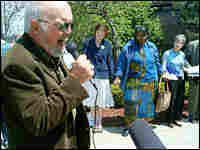 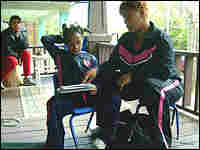 Angel Bridgewater, helping her 7-year-old niece with homework, worries that an illness or injury could land her and her kids on the street. Frank Morris for NPR hide caption 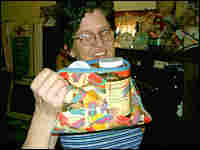 Irene Schivers, who is disabled, faces a hike in the money she'll have to pay out of pocket for drugs and care. Frank Morris for NPR hide caption

Medicaid has become the single biggest budget item for most states, and nearly all of them are trying to curb its growth. In Missouri, plans to pare 90,000 people from the Medicaid rolls in 2005 have sparked a fierce debate over the morality of the cuts.

The proposals have opened a moral schism, with some preachers expressing outrage, but the governor, a devout Christian, defends the cuts as morally correct. Gov. Matt Blunt says not cutting Medicaid would force him to raise taxes -- and in his eyes, raising taxes is wrong.

Missouri's Medicaid program has more than doubled in size in the past decade, expanding to cover almost one in five citizens. And the governor's office says taking some people off Medicaid will motivate them to improve their lot in life.

Among those affected by the changes is Angel Bridgewater, whose $6.70-per-hour McDonald's job makes her ineligible for state medical aid. Despite supporting three children, she now has to make less than $86 each week to qualify for Medicaid. Before the cuts, she qualified while earning about $300 a week. Bridgewater calls the new eligibility standard, the lowest allowed by federal law, "sickening."

While the proposed changes will likely put more uncollected debt in the hands of hospitals, the state itself stands to lose federal grants that cover most of Medicaid's costs. The $600 million cut means an almost $380 million annual loss in federal payments to the state. Amy Bluin of the Missouri Budget Project says the state is entering new territory. "We have to question if we are the crash-test dummy for the nation," she said. "Are we going to be standing out as the show-me state, for other states, or showing them what not to do?"

For disabled Missourians like 44-year old Irene Schivers, the situation is no less serious. Schivers spends her days in a mobile home she shares with two dogs, a computer and a collection of dolls. Cerebral palsy and lupus have made her unable to work. She says that the new guidelines, with would require her to take in less than $500 a month before Medicaid kicks in, will make her ration food and give her dogs away.

"They want us to die," says Schivers. "We are a burden on society, so they don't care. We don't work, so why should we get anything? Just go ahead and die."

As both sides seek the moral high ground in the debate, some leaders are formulating plans to make plans further cuts. A commission will soon be formed with a mandate to dismantle Medicaid in Missouri by June 30, 2008.