Accessibility links
Largest U.S. Mosque Opens in Michigan Michele Norris talks with Imam Hassan Qazwini, the spiritual leader of the Islamic Center of America, about the new mosque in Dearborne, Mich. The mosque, which opens Thursday evening, is the largest in the United States.

Michele Norris talks with Imam Hassan Qazwini, the spiritual leader of the Islamic Center of America, about the new mosque in Dearborne, Mich. The mosque, which opens Thursday evening, is the largest in the United States. 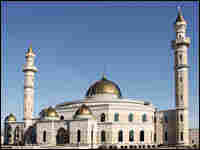 The new mosque is the largest in the United States. Islamic Center of America hide caption 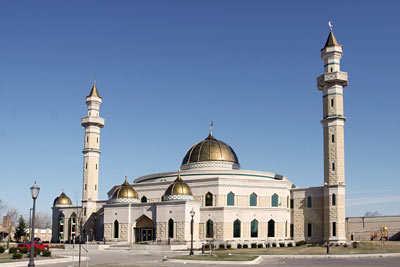 The new mosque is the largest in the United States.

The largest mosque in the country is opening its doors today. It's in Dearborn in southeastern Michigan, which is home to one of the largest Muslim populations in the United States. The massive 92,000-square-foot structure is called the Islamic Center of America. It cost $14 million to build, and it includes a school, a library and a conference center. Imam Hassan Qazwini is a spiritual leader of the Islamic Center of America, and he joins us now.

Imam HASSAN QAZWINI (Islamic Center of America): Thank you so much. I appreciate your congratulations.

NORRIS: Could you describe the mosque for us?

Imam QAZWINI: The mosque is so beautiful. It's a piece of art. It is magnificent from outside. It includes mainly three parts--the school, the full-time school that was built almost eight years ago in the first phase; and now in the second phase there are two major projects. One one is the mosque itself, meaning the prayer room that holds over 1,000 people, and then the banquet hall that would hold around 2,000 people--and something that the entire Muslim community will be proud of.

NORRIS: And yet the mosque opens at a time where many Muslims feel that they are distanced from other groups in the wake of 9/11. Many say that they feel misunderstood, in some cases mistreated or victims of discrimination. What are the biggest challenges for the people who will worship and study at the Islamic Center?

Imam QAZWINI: Well, no doubt, I believe that the major challenge for Muslims in this country is the type of stereotype that we go through. We are always being singled out; we are always being stereotyped. And I believe that this is our task, our challenge as Muslims to go out and educate others about our religion. I believe the center itself, the new center, will give an excellent opportunity for the Muslims to reach out to others and ultimately give a more accurate image about the faith of Islam.

NORRIS: I understand that the mosque was founded in 1949, organized by Lebanese American families. If I were to visit the Islamic Center in these days, if I were to visit on a Friday afternoon for Friday prayers, what might I see? What kind of people might I see there in the congregation?

NORRIS: The opening ceremony is today. And tomorrow you will hold Friday prayers for the first time in the Islamic Center. Can you tell us a little bit about what you plan to say?

Imam QAZWINI: Tomorrow will be the first Friday prayer we are holding in this center. We invited all Muslims to attend and to participate in this prayer. I'm going to concentrate my sermon tomorrow for the Friday prayer on unity--that's the first thing I will focus on, unity among Muslims. And also the second thing that I will emphasize is how to continue building bridges with our non-Muslim brothers and sisters, especially that we live in this very diverse society here in the United States.

NORRIS: Imam Qazwini, thank you so much for speaking with us.

Imam QAZWINI: Thank you so much for having me.