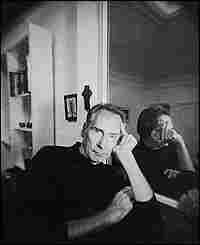 Trumpeter Jon Hassell began to create what he dubbed "Fourth World" music in the 1970s. He defines it as "a unified primitive/futuristic sound combining features of world ethnic styles with advanced electronic techniques." He continues his exploration on the CD Maarifa Street. Though it sounds highly produced and richly textured, much of this material was taken from live performances in Milan, Montreal, Paris and Los Angeles.

The recording is dedicated to the late Mati Klarwein, a painter whose collage graces the cover. Klarwein's work may look familiar -- he did the cover work for Miles Davis's Bitches Brew and Santana's Abraxas. The collage Hassell uses is called "Crucifiction," and caused a stir when it was exhibited in 1964 in New York.

And in case you're wondering, there is a Maarifa Street. It's in Iraq. "Maarifa" is an Arabic word meaning knowledge or wisdom.