Accessibility links
Souza Lends a Fresh Note to Brazilian Music On her new CD, Duos II, Luciana Souza adds vocals to a Brazilian instrumental tradition: the choro. It's a break from tradition, but it seems to fit a performer who is equal parts samba singer, jazz singer and classical singer. Souza chats with Jacki Lyden. 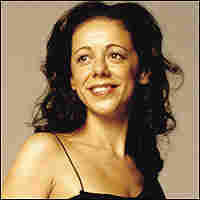 Luciana Souza, in a detail from her new CD. hide caption

When Luciana Souza was gathering material for her new album, she asked guitarist Marco Pereira to write her an original "choro." The choro is a Brazilian form of music that gave rise to samba and bossa nova. It dates back to the late 1800s and was influenced by 19th Century European salon music. The choro relies on improvisation, and is usually played by small ensembles, without any vocals.

But as Jacki Lyden notes, the choro is a fitting metaphor for a performer who is equal parts samba singer, jazz singer and classical singer. It's no wonder she wanted to lend her voice to a choro on her new album, Duos II.