Accessibility links
Looking at the World Through Beer Glasses Robert Siegel talks about the history of beer with Tom Standage, technology editor at The Economist. A History of the World in Six Glasses is Standage's new book that traces the history of civilization through beer, wine, distilled spirits, coffee, tea and coca cola. Beer was first produced at the end of the ice age and became popular with the Sumarians.

Listen
Looking at the World Through Beer Glasses

Robert Siegel talks about the history of beer with Tom Standage, technology editor at The Economist. A History of the World in Six Glasses is Standage's new book that traces the history of civilization through beer, wine, distilled spirits, coffee, tea and coca cola. Beer was first produced at the end of the ice age and became popular with the Sumarians.

And in this segment of our program, we concern ourselves with a beverage: beer. In a little bit, we will enter the world of high-end beers. But first, a few minutes devoted to the subject of beer and civilization. Tom Standage is technology editor of The Economist and author of the forthcoming book "A History of the World in Six Glasses." Six beverages, he writes, have defined the past of human kind: beer, wine, distilled spirits, coffee, tea and the drink that epitomizes the current age of global commerce, he writes, Coca-Cola. But centuries before intercontinental carbonation or the rise of the European coffee house filled with intellectuals with brains sharpened by caffeine, the first beverage which marked civilization's improvement upon nature was beer. Tom Standage joins us from London.

Welcome to the program once again.

Mr. TOM STANDAGE (Technology Editor, The Economist; Author, "A History of the World in Six Glasses"): Thank you for having me.

SIEGEL: How old is beer?

Mr. STANDAGE: Nobody really knows, but it seems to be older than civilization itself. It probably goes back to about 10,000 BC, and it may go back even further. The trouble is that not much from that period survives and particularly not organic material, so we cannot be sure.

SIEGEL: How did people make beer at first?

Mr. STANDAGE: Well, again, we can't tell because obviously we don't have any written records from that period. But there are legends that describe the accidental creation of beer, which probably come quite close to what happened. Around that time at the end of the ice age, people started gathering cereal grains for the first time, and they noticed that if you kept these grains, you could protect yourself against food shortages, so that was very useful. And they started burying them in pits so they could go back to them later. And at some point, these pits weren't perfectly water-tight, some water would have got into one of them, and you might have got fermentation that way.

Another thing these grains were used for was to sort of thicken soup. And if you made soup with nothing but these grains, and then you left it lying around for a bit, that would also have fermented. So somehow or another, I mean, this is in fact what happens in one of the Egyptian myths, you end up with some fermented grain sitting in water, and the result is beer.

SIEGEL: Well, one measure of how ancient beer is is that beer is served in order to civilize a character in the epic of Gilgamesh, the Sumerian king from 2700 BCE.

Mr. STANDAGE: Yes, that's right. So there's a character who is sort wild man, and he's taken in, and he's kind of cleaned up and scrubbed and given some new clothes. And then he's given bread and beer, seven jugs of beer, in fact, to drink. And he's told this is what they do in the cities, this--you know, if you want to get on in the world and you want to be civilized, then you have to drink beer. So he does. And the equation between beer and civilization is very clear for the Sumerians because previously they were hunter-gatherers. They didn't have things like cities and writing, and they didn't have beer either. And all these things go together because they all arise from the surplus of cereal grain. So beer drinking was one of the things that reminded the Sumerians that they were different from the people of the past who hadn't had any of the trappings of modern life.

And the other amusing thing is that one of the Sumerian epics describes a Sumerian god making a banquet for another god, and the steps are all mapped out for how the beer is made, which means that the oldest written recipe in the world is for beer.

SIEGEL: Just thinking of the phrase, `I drink beer therefore I am civilized,' almost is what you're saying.

Mr. STANDAGE: Yes. It was equated with civilization, with pleasure, with wealth, with happiness. You might greet someone and say, `Bread and beer,' which was like saying, `Good luck,' or `Good to see you.'

SIEGEL: Do we have any idea whether the beer that was consumed in ancient Mesopotamia was even remotely as good as a Bud Light.

Mr. STANDAGE: Well, it depends whether you think a Bud Light is a good beer or not. A lot of people would disagree with you, particularly fans of Belgian beer. The beer from a long time ago was recognizably the same, but at the same time, it was rather different. The principle difference is that modern beers almost invariably have hops in them. And hops were only introduced into beer around 1000-1200 AD. So for most of human history, beer has not tasted the way it does today. And if you drink beer without hops in it, and there are one or two examples of beer that still exist, it's an awful lot more like wine. It has a sort of winey taste to it. And part of that is because of the wild yeast. But it's also because you don't have the sort of bitterness of the hops balancing the sweetness of the barley and the malt. So it's a very different sort of drink. And, in fact, one of the last of the Babylonian kings referred to wine as `that excellent beer of the mountains' because, as far as he could tell, wine was just a very nice kind of beer. And, in fact, ancient beer is a lot more similar to wine in its taste to a modern palate. So there are beers around today that are sort of vaguely like ancient beer. But most beer, even Bud Light, is very different.

SIEGEL: Tom Standage, thank you very much for talking with us.

SIEGEL: Tom Standage, who is the technology editor of The Economist, is the author of the forthcoming book "A History of the World in Six Glasses." 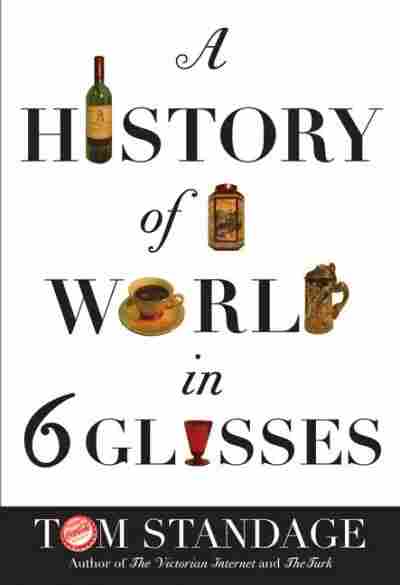 The History Of The World In Six Glasses