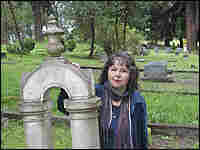 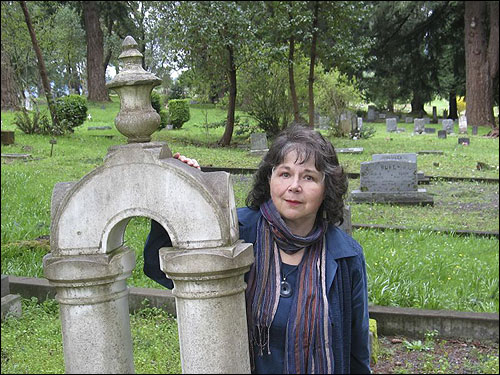 Shannon Applegate poses in the graveyard that inspired her book. 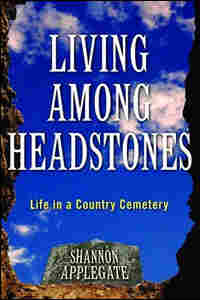 Of her job as sexton, Applegate writes: "It's a real conversation piece, a place to begin a good story." hide caption

Of her job as sexton, Applegate writes: "It's a real conversation piece, a place to begin a good story."

Eight years ago, Shannon Applegate found herself the owner of a small rural cemetery in Douglas County, Ore. The graveyard, dating from the pioneer era, is two hours from Eugene, in a sparsely populated county of 5,000 square miles.

With the land, Applegate inherited all the foibles and fractiousness of a small town. Now she has written about them in a new book, Living Among Headstones. The book ranges from ruminations on plastic flowers to the story of a florist's unintentionally funny misspelling on a graveside sash.

Since inheriting Applegate Pioneer Cemetery, Applegate says she has tried to preserve the five-acre cemetery. In the process, she's learned a lot about gravediggers, the rules of the business, and human nature.

Read an excerpt from the first chapter:

When I told my father I would take responsibility for the cemetery I did not reckon on having to bury my friends. There is a hollow place in the pit of my stomach. I feel vaguely disoriented and the pull of something, an emotional undertow. I know from past experience these feelings are connected to the loss of a friend.

But there are other feelings, new feelings that add to my discomfort, such as the sense of pretending to be something or someone who I am not. I am dismayed by my ineptitude.

When I agreed to take this all on a few weeks ago I had no idea what I was in for. Ever since, Dad has been bringing more cemetery records, looking relieved as though I have taken quite a bit off his mind. My back room is filling up with shoe-boxes full of scraps of paper -- notes written on corners of envelopes, pocket pads, and cafe napkins in the indecipherable masculine scrawls of various caretakers since the 1950s. Then there are the earlier records: hundred-year-old dog-eared ledgers, and water-stained notebooks from the 1930s and 1940s revealing Aunt Hazel's and her mother, Lucy Samler's, dainty writing describing plot sales, money paid out for maintenance, etc. Yellowing obituary clippings are tucked between the pages. On these are terse notes in inky finality: "Buried here." There are also rolled up plat maps, legal descriptions of the cemetery, and survey notes. The more recent records are in three-ring binders with accompanying recipe boxes filled with alphabetized note cards showing cemetery blocks and individual plots.

As time permits, I have picked my way through the paper wilderness that seems to be my lot in life. Indeed, "lot" and "plot" are the operative words, lately. If this was all there were to my new job as cemetery sexton, things would be fine. I've actually enjoyed the lingering over letters that the cemetery has received in envelopes sometimes as simply addressed as: Pioneer Graveyard, Yoncalla, Oregon.

Some of the letters pose practical questions: "To whom it may concern: None of us lives in Oregon anymore and we would like to see if you could sell the unused western half of our family plot (Block X, Lot X) and send us the money." Others pertain to genealogy and family history: "We are looking for the grave of our great-great-great-grandfather so-and-so who supposedly settled in the Yoncalla area after the Spanish-American War and went into the fruit growing business before his second wife left him."

Until today, in terms of cemetery business, the leisurely putting in order of this paper parade is all I've accomplished -- if "business" is the right word for this family enterprise that started over a century ago.

Of course, I've made the most of telling my friends about my new endeavor. My "new job."

"No. Those are used on ships to determine longitude and latitude. A sexton. It's sort of Old English. A country sexton. I run a cemetery. Only it's not in a churchyard."

It's a real conversation piece, a place to begin, a good story. But today, it is much more ponderous than that.

However, sprinkled lightly, as to be barely discernable, I will give myself a little credit: At least I have risen to this particular occasion, albeit slightly listing, on account of my broken foot. Here I am leaning on my crutches, at the gravesite Lee and Diana Whipple chose not too many years ago. I am waving good-bye to Dana. She is headed back to Whipple Tree Lane with a relative who has come to help prepare home and, I dare say, heart, for her husband Lee Whipple's memorial gathering: in today's parlance, "A Tribute of Life."

Watching her retreat as she makes her way to the car, I notice her osteoporosis seems more pronounced than it was a few months ago but for all that she still has a get-on-with-it-ness in her steps, especially as compared to her much heavier and younger companion.

The cemetery caretaker before last -- who sometimes cared less -- sold Lee and Dana these sites at one hundred dollars each. Before the most recent caretaker moved away, he advised me to stick to sales in this relatively empty southeast corner of the cemetery where Lee and Dana have their plots.

"That way," he said in his Louisiana drawl, "you won't get yourself into trouble."

It is the trouble I have come to dread. The trouble I've even dreamed: I am marking a grave in the wrong place. They are digging where someone already is. I awaken imagining I am hearing the thud of backhoe blade against coffin. 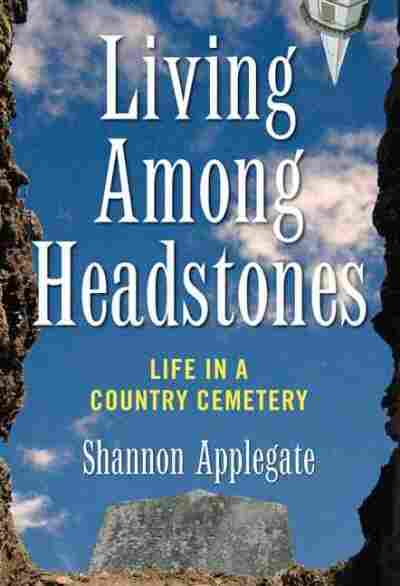 Life In A Country Cemetery