Accessibility links
A Gruesome Stroll Through Medical History The National Museum of Health and Medicine in D.C. is not for the squeamish. Founded in 1862, the museum displays everything from a large human hairball to skull fragments from Abraham Lincoln. 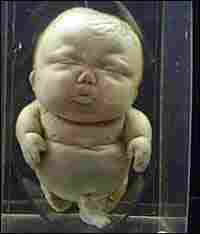 National Museum of Health and Medicine

The squeamish should think twice before visiting the National Museum of Health and Medicine in Washington, D.C. Founded in 1862 to document the effects of war wounds and disease on the human body, the museum displays everything from a large human hairball to skull fragments collected after Abraham Lincoln's assassination.

But some of the museum's most unsettling stuff is in storage -- including thousands of amputated body parts from more than 6,000 soldiers wounded during the Civil War. The body parts were sent to Washington on the orders of Surgeon General William Hammond, who had told medical officers to send interesting specimens from the battlefield for research and possible display.

Every body part in the museum's collection -- which includes larynxes, hearts, bones and brains -- has historical significance. Some were saved to illustrate the disease or wound that afflicted them, others the medical procedure used to removed them.