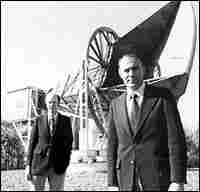 The Bell Labs antenna in Crawford Hill, in northeastern New Jersey, was designed to trace signals bounced off satellites. But Penzias and Wilson used it to study radio emissions from the Milky Way. They needed quiet. Instead, they found noise -- a strange, maddening hum.

"We call it noise because it's completely unstructured, it's random signals," Wilson says.

At first, they couldn't figure out where the noise was coming from. They ruled out military testing. And then, inside the horn of the big antenna, they found droppings from pigeons that were nesting there. The scientists tried to trap the birds and release them 30 miles away, but they kept flying back. Penzias says the team had no choice but to kill the pigeons. "It seemed like the only way out of our dilemma," he says.

The pigeons were gone, but the noise remained. And it was coming from every direction.

The great search might have ended right there, but Penzias learned that Princeton professor Robert Dicke had been predicting that the residue of the Big Bang would be low-level background radiation throughout the universe. Penzias called him and learned that Dicke and physicist Dave Wilkinson were about to build a device to hunt for cosmic background radiation.

Although the teams both published papers, it was Penzias and Wilson who in 1978 won the Nobel Prize for physics for what has been called the most important scientific find of the 20th century.