Los Angeles has elected its first Latino mayor in more than 100 years. City Councilman Antonio Villaraigosa won by a landslide, ousting the incumbent James Hahn. Black voters, who backed Hahn four years ago, were the critical element in Villaraigosa's victory. 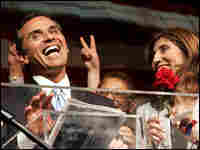 Mayor-elect Antonio Villaraigosa appears with his wife Corina at a post-election rally in Los Angeles, May 17, 2005. Reuters hide caption

Los Angeles has elected its first Latino mayor in more than a century. The latest tally from yesterday's election shows that city councilman Antonio Villaraigosa won by a landslide, ousting incumbent Mayor James Hahn. It was a bitter rematch for the two candidates. This time Villaraigosa won with the help of black voters. Four years ago, those voters had been strongly behind Hahn. NPR's Ina Jaffe has more.

You didn't need to speak Spanish to understand these lyrics. It's the name LA residents will be hearing a lot for the next four years. Antonio Villaraigosa's supporters had to wait until midnight to hear him deliver his victory speech. But until then, they were serenaded by mariachis, klezmer bands and soul singers and feasted on barbecue, Mexican, Korean, Italian and Chinese food. Like nearly every speaker during the evening, State Assemblyman Mark Ridley-Thomas, an African-American from South LA, touted a new multiethnic political coalition in this most diverse American city.

Mr. MARK RIDLEY-THOMAS (California Assemblyman): Regardless of whatever community we come from, Antonio said to us, `You are somebody. You're worth being a part of Los Angeles. We're going to build the kind of coalition that will set a new standard for the entire nation. That's what this mayoral campaign represents.'

JAFFE: If Villaraigosa was able to put together a broad coalition, it was partly because the one that elected Jim Hahn four years ago deserted him. The mayor alienated African-American voters when he fired the city's black police chief. Many San Fernando Valley voters resented him for defeating their attempt to secede from the city. But when Hahn finally addressed his supporters, he didn't concede. He told them to hang on, that it was going to be a while. And then he reminded them of how bad things were in LA before he became mayor.

JAFFE: One of Hahn's problems, says political analyst Sherry Bebitch Jeffe, is that a lot of voters were hearing about his accomplishments for the first time.

Ms. SHERRY BEBITCH JEFFE (Political Analyst): One of the weaknesses of Jim Hahn is that he either will not or cannot communicate effectively with voters. He isn't comfortable reaching out.

JAFFE: That left a vacuum. And that vacuum was filled by scandal. Hahn's administration is under federal and local investigations into the possibility that his campaign contributors got sweetheart contracts from the city. And he didn't run a single positive commercial about his own record. In fact, Hahn created a little history of his own last night. He became the first LA mayor since the 1930s to be denied a second term. And even without Hahn's concession, when Villaraigosa finally addressed the huge street party of supporters, he had the confidence of a winner.

Mayor-Elect ANTONIO VILLARAIGOSA (Republican, Los Angeles): You all know that I love LA, but tonight, I really love LA!

JAFFE: Villaraigosa touched on his main themes, bringing the city together and the hard work ahead. And he talked about his late mother, Natalia, who raised four children alone and always believed in him.

Mayor-Elect VILLARAIGOSA: I wish I could share this night with her, but, you know, if my mother were here tonight, she'd say, `Antonio, don't declare victory, declare your purpose.'

JAFFE: Villaraigosa remained on stage with family and friends and just before he was about to leave, he did get the call. Jim Hahn conceded, he told his supporters, in a gracious manner.

Mayor-Elect VILLARAIGOSA: This was my mother's favorite saying to all of us, `It's a beautiful day, Los Angeles.'