Accessibility links
U.S. Navy Report Blames Crew for Sub Accident The crew of a U.S. Navy submarine that crashed into an undersea mountain in the Pacific was relying on a chart that did not indicate the mountain was there, according to an investigative report. 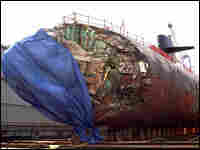 The USS San Francisco in dry dock in Guam in a January photo. Mark A. Leonesio/U.S. Navy hide caption 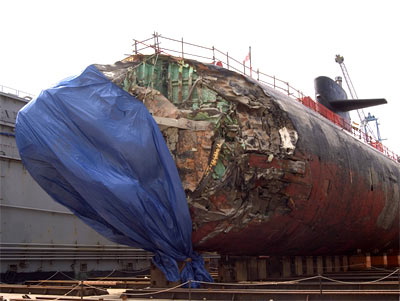 The USS San Francisco in dry dock in Guam in a January photo.

On Jan. 8, the nuclear-powered submarine USS San Francisco crashed into an undersea mountain about 360 miles southeast of its home port of Guam. The sub was moving at top speed, nearly 40 mph.

The crash destroyed the bow of the submarine, causing more than $88 million in damages, and sent the crew inside flying. One of the 137 crew members was killed; 97 others were injured.

The Navy has blamed the crew for the accident; several of the officers were relieved of their duties. It also turns out that the crew was relying on one navigational chart that gives no indication of the undersea mountain.

"Other charts in San Francisco's possession did, however, clearly display a navigation hazard in the vicinity of the grounding," the Navy's investigative report said. The submarine's navigation team "failed to review those charts adequately and transfer pertinent data to the chart being used for navigation, as relevant directives and the ship's own procedures required."

Melissa Block talks to Christopher Drew of The New York Times, who reconstructed the accident.