Accessibility links
Hondurans Brace for Pros, Cons of CAFTA The Central America Free Trade Agreement is as controversial in other countries as it has in the United States. For Honduras and other relatively poor countries, the consequences of free trade with the world's largest economy could be enormous. 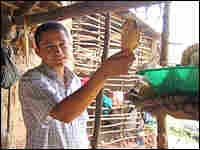 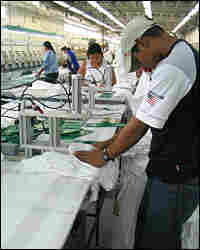 A worker in an apparel factory uses a laser to center a shirt before applying a logo. Kathleen Schalch, NPR hide caption 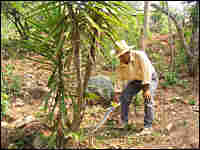 The Central America Free Trade Agreement has been as controversial in other countries as it has in the United States. For Honduras and other small, relatively poor countries, the consequences of free trade with the largest economy in the world could be enormous.

Business groups in Honduras say they need CAFTA to modernize the economy and create jobs. CAFTA would give most Honduran exports permanent duty-free access to the U.S. market. Jobs in factories that export to the United States can pay as much for an hour's work as many Hondurans earn in a day.

Unions in Honduras say wages are still too low. Even some workers who may benefit, as production shifts to Honduras, worry that they will be exploited in what unions call a "race to the bottom."

Unions also complain that CAFTA could hurt Honduran farmers. U.S. trade officials say U.S. agricultural exports to Central America are likely to double. Many Honduran farms are small and inefficient and they're likely to have a tough time competing. Roughly half of Central America's population lives in rural areas. And more than a third of all Central Americans grow crops. Some worry that many farmers will join the ranks of the unemployed.

But a new study by the World Bank says that on balance, CAFTA will help Central Americans more than it will hurt them. Lead author Felipe Jaramillo points out that small farmers living in remote villages often suffer from extreme poverty, malnutrition and disease. He says income losses to farmers will be relatively modest and manageable, because subsistence farmers can still feed themselves, and other farmers may be able to switch to crops that can be exported to the United States.

In order to fight poverty, Jaramillo says Central America nations need growing economies. They need to attract investment and educate their people and find ways for them to link to the global market.

This report is part of public radio's "Thinking Globally" series.