Accessibility links
Specter Stands at Center of Debate Over Judges Fifth-term Republican Sen. Arlen Specter of Pennsylvania harkens back to another era in the Senate, when both parties had members who felt most at home in the political center. Specter's seniority has made him chairman of the Senate Judiciary Committee, putting him in the middle of the fight over the federal judiciary.

Listen
Specter Stands at Center of Debate Over Judges

Fifth-term Republican Sen. Arlen Specter of Pennsylvania harkens back to another era in the Senate, when both parties had members who felt most at home in the political center. Specter's seniority has made him chairman of the Senate Judiciary Committee, putting him in the middle of the fight over the federal judiciary. 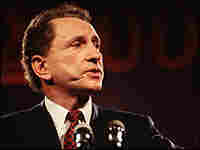 As the debate unfolds over the judicial nominees, there are once again a half-dozen moderate Republicans in the middle. One of those Republican modreates is Arlen Specter, chairman of the Senate Judiciary Committee. NPR legal affairs correspondent Nina Totenberg spoke with Specter earlier this week.

Arlen Specter, loathed by many on the right, mistrusted by many on the left and ever unpredictable, is fighting a bigger battle than the filibuster. He's fighting cancer. Bald from biweekly chemotherapy and thinner, the 75-year-old senator is still at work every day and on a squash court in the morning.

Senator ARLEN SPECTER (Republican, Pennsylvania; Judiciary Committee Chair): My definition of winning is playing and surviving, and I'm pleased to report that, by that definition, I won this morning.

TOTENBERG: Specter is not saying how he'll vote on abolishing the filibuster, but his position, like that of other moderates, is getting lonelier in the GOP. When he came to the Senate in 1980, there were 22 members of the Wednesday Club, the moderates' lunch group. Now there are so few they no longer meet.

Sen. SPECTER: We sort of lost our critical mass. Where you don't have at least six, eight, 10, it's hard to stay together.

TOTENBERG: And yet there have been times when the moderates have made the difference.

Sen. SPECTER: On some occasions we hold the balance of power, we were able to make some very important changes in the budget resolution when it came to Medicaid and on community development block grants.

TOTENBERG: Some of the moderates suffer under the pressure from the Bush administration and from the more conservative leadership of the Senate. As one senator put it, `We get beat up.' Specter, however, seems unfazed.

Sen. SPECTER: If I get beat up, I don't notice it. And if I did notice it, I wouldn't admit it.

TOTENBERG: But in the last year Specter has had some close brushes with political death within his own party. He barely survived a tough primary challenge from a conservative opponent. And then, just when he was poised to ascend to the chairmanship of the Judiciary Committee after 24 years in the Senate, conservatives were outraged by his pro-choice remarks last fall, and he had to placate them by promising not to oppose any Bush judicial nominee in committee. That promise did not bind his actions on the Senate floor, however, and recently he's tried to broker a compromise on the filibuster. Up to now, he and other surviving moderates have failed.

Specter is a tough old pol with sharp elbows and a notoriously prickly personality. He won the fury of conservatives when he opposed the Supreme Court nomination of Robert Bork in 1987 and the fury of liberals for his interrogation of Anita Hill at the Clarence Thomas confirmation hearings in 1991. He says he has no regrets about either.

You know, your mortal sin probably in your own party was your vote on Bork. Do you regret that?

Sen. SPECTER: Absolutely not. Judge Bork had a view of the Constitution which was different from anybody else who'd ever been nominated to the Court. He was, doubtless, a brilliant man, but he could have turned the Constitution upside down.

TOTENBERG: While the Bork vote cost Specter political capital in his own party, a maverick vote on the filibuster could conceivably cost him his chairmanship of the Judiciary Committee. Though the Senate has not stripped any member of a chairmanship in 150 years, it is not out of the realm of possibility. After all, the Senate has never abandoned the filibuster by majority vote either. For conservatives, though, a dethroned Specter could create a powerful and savvy critic free to cast crucial votes of conscience. In short, it is said Specter could become the Bush administration's worst nightmare.

Sen. SPECTER: Well, I don't know. There are lots of presidential nightmares in the Senate on the Democratic side. I think it'd be tough competition for me to become the president's worst nightmare.

TOTENBERG: On the other hand, Specter is a loyal Republican who, in his short tenure as chairman so far, has already won praise from the business community for moving legislation quickly on bankruptcy laws and class-actions. He's even brokered a long-elusive compromise with Democrats to end asbestos litigation and to create a trust fund for asbestos victims.

TOTENBERG: Or perhaps if they were as diligent and energetic as Arlen Specter. Nina Totenberg, NPR News, Washington.