Accessibility links
'Contagious Media' Contest Targets You A virtual race begins tonight on the Internet. It's a race among Web designers to see who can send out the most contagious e-mail. "Contagious media" are all those little amateur videos, singing computer animations and e-mail hoaxes that your friends send you. The contagious media showdown follows a conference in New York about the science of goofy stuff on the Web.

A virtual race begins tonight on the Internet. It's a race among Web designers to see who can send out the most contagious e-mail. "Contagious media" are all those little amateur videos, singing computer animations and e-mail hoaxes that your friends send you. The contagious media showdown follows a conference in New York about the science of goofy stuff on the Web. 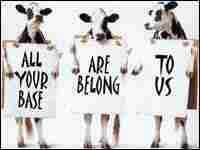 An image from the popular Internet video "All Your Base Are Belong to Us," featuring an ungrammatical line from Zero Wing, a Japanese video game. All Your Base hide caption

toggle caption
All Your Base

Tonight on the Internet, a virtual race begins. Web designers from around the world will compete to see who can send out the most contagious e-mail. Don't worry. We're not talking about computer viruses here. Contagious media are all those little amateur videos, singing computer animations and e-mail hoaxes that your friends send you and then you forward on to 10 more people. NPR's Robert Smith reports that the winner will be the person who designs the most popular time-wasting Internet craze.

You can never predict what millions of Internet users around the world will all of a sudden go nuts for.

SMITH: In 1996, a little animated baby doing the boogaloo on the Internet spread from office cubicle to office cubicle. Web designer Jonah Peretti says it was one of the first real signs that a new media power was out there. He calls it the bored-at-work network.

Mr. JONAH PERETTI (Web Designer): People sit in their office jobs all day, and they forward e-mails to their friends, they IM funny websites to each other, they post on their blogs or read blogs. And millions and millions of people are getting information, media and jokes and ideas through the Bored At Work Network.

SMITH: And what makes something contagious? Nobody knows. So Peretti and the media arts organization Eyebeam are doing an experiment. They've asked Web designers around the world to come up with their best shot at creating an Internet sensation. The Contagious Media Showdown, it's called. All the projects will go online at the same time, and their progress will be tracked in June.

Mr. PERETTI: Part of the goal of that is to try to get a better understanding of how these kinds of viral phenomenon work. How do they spread through six degrees of separation. And one way to understand that is to do new projects.

SMITH: In preparation for the contest, Eyebeam held a conference in New York City recently to explore the science of goofy stuff on the Web. Crowds of Web designers took notes as the presenters walked them through the history of contagious media. They showed us how an ungrammatical line from a Japanese video game, 'All your base are belong to us,' became an Internet video that spread like wildfire.

SMITH: Also essential is the element of humor. Perhaps the most widely watched political commentary of the last presidential election is JibJab's animation of "This Land."

(Soundbite of JibJab's "This Land")

"Sen. KERRY": (Singing) You're dumb as a doorknob.

SMITH: And then there are the ones that can't be explained.

SMITH: Some chubby kid in a basement in New Jersey records himself lip-syncing along to a Romanian dance song.

SMITH: The most striking thing about all of these was not the content, per se, but the transmission. MIT student Cameron Marlow showed a graph of Web site traffic for the JibJab video: a huge peak in viewers, then a rapid drop-off in interest. These things don't stay fresh for very long.

Mr. CAMERON MARLOW (MIT Student): You have your sort of window of time to make your impression, and if you don't, then you've missed the chance.

SMITH: Listening in carefully to all of this is the advertising industry. Among the Web designers and artists at the conference were creative directors of ad agencies looking for new ways to reach audiences. Jeff Benjamin is with Crispin Porter & Bogusky.

Mr. JEFF BENJAMIN (Crispin Porter & Bogusky): It's all entertaining, you know. Like, everybody's laughing in there, but in the end, these are all, like, potentially ads. And I think that agencies and brands have kind of--they're looking at that now, and they're saying, 'OK, maybe this is the next medium that we can communicate, sort of, our brand message.'

SMITH: But the most successful forms of contagious media seem unintentional...

SMITH: ...things that people did without wanting to make money or be rich and famous.

SMITH: Can you still capture that?

SMITH: And Benjamin has already succeeded wildly. He helped create the Subservient Chicken, a Web site for Burger King that gave people the illusion of controlling a man in a chicken suit. That subtle ad for a chicken sandwich attracted 14 million unique visitors.

Also watching the spread of contagious media is the art world. Currently an exhibit at The New Museum of Contemporary Art in New York City is featuring the most famous and provocative examples of Internet sensations. Rachel Greene is the curator.

Ms. RACHEL GREENE (Curator, The New Museum of Contemporary Art): I'm not going to say that all of it is complex or sophisticated or historically important work. But I think that for people, it's really important. Something like the "Dancing Baby" just becomes kind of part of our shared lexicon, for better or for worse.

SMITH: And for better or for worse, the Contagious Media Showdown could soon send even more diversions to your e-mail in-box. Among the likely competitors: a Web site that will allow you to control a robot that looks like President Bush; a video that features a montage of breast-feeding babies; and leftoverlunch.com, a site that features an in-depth look at lunches way past their expiration dates. Sounds contagious in more ways than one. Robert Smith, NPR News, New York.