Accessibility links
The Venerable Juilliard, Turning 100 The Juilliard School celebrates the 100th anniversary of its charter, marking a century of preparing fine musicians and performers. The school was the first American institution to rise to the level of its European counterparts. 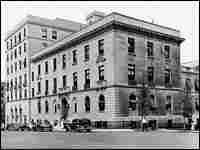 The Institute of Musical Art (the three-story building at the near corner) and the Juilliard Graduate School (far corner) at Claremont Ave., circa 1950. Alton Taube hide caption 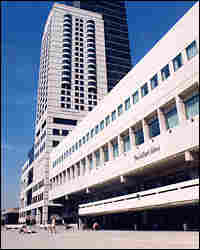 In 1969, the Juilliard School moved to its current space at Lincoln Center at Broadway and West 65th St. It also includes a high-rise dormitory, rear. Jenna Soleo hide caption

Leppard's Critique, and a Practice

The Juilliard School is launching its centennial year. The New York school has trained some of the world's most famous musicians, from Philip Glass and Peter Schickele to Wynton Marsalis. Drama graduates include Kelsey Grammer, Bradley Whitford and Kevin Kline. Now Juilliard has held its 100th commencement ceremony.

Those honored at the ceremony ranged from violin virtuoso Itzhak Perlman and soprano Leontyne Price to playwright Terrence McNally. Christopher Reeve's wife, Dana, received a commendation on behalf of her late husband, a graduate himself.

Founded in 1905 as the Institute of Musical Art, Juilliard was the first American institution to rise to the level of its European counterparts. Its original founder, Polish-born Frank Damrosch — the godson of Franz Liszt — saw a need for American musicians to finish their schooling in their own country instead of traveling abroad.

The Juilliard Graduate School opened adjacent to the music institute in 1924; the two merged in 1926, despite maintaining separate leaderships. They officially became a single school in 1946. The Juilliard School moved to its current location at the Lincoln Center on New York's Upper West Side in 1969. Around that time, individual divisions for drama and dance were also created.