Accessibility links
Richard Florida, Tracking the 'Creative Class' Three years ago, Richard Florida argued that artists and entrepreneurs, scientists and health care professionals drive American business innovation... so cities should create an open, tolerant environment for "cultural creatives." Now the public policy professor takes his argument global, and sounds an alarm: the United States may be on the verge of losing its competitive edge in attracting innovators. 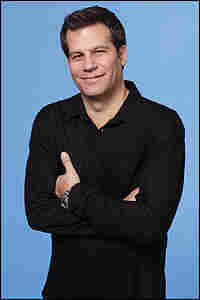 Three years ago, Richard Florida argued in his book The Rise of the Creative Class that artists and entrepreneurs, scientists and health care professionals drive American business innovation. Cities and regions will thrive by providing an open, tolerant environment for "cultural creatives," he said.

Now the public policy professor has taken his argument global in a new book: The Flight of the Creative Class. He also sounds an alarm: the United States may be on the verge of losing its competitive edge in attracting innovators.

From the First Chapter of Flight of the Creative Class:

In March of 2003, I had the opportunity to meet Peter Jackson, the Academy Award-winning director of the Lord of the Rings trilogy, at his film complex in lush, green, otherworldly Wellington, New Zealand. Jackson has done something unlikely in Wellington, a smallish but exciting cosmopolitan city of roughly 400,000, and one certainly not previously considered a global cultural capital. He has built a permanent facility there that is considered one of the world's most sophisticated filmmaking complexes. And he did it in New Zealand for a reason.

Jackson, a Wellington native, realized what many American cities discovered during the 1990s: that paradigm-busting creative industries could single-handedly change the way cities flourish while driving dynamic and widespread economic change. It took Jackson and his partners a while to raise the resources, but they eventually purchased an abandoned paint factory that, emblematic in its adaptive transformation and reuse, emerged as the studio responsible for the most breathtaking trilogy of films ever made. He realized, Jackson told me, that with the allure of the Lord of the Rings movies he would be able to attract a diverse array of creative talent from around the world, enticing the best cinematographers, costume designers, sound technicians, computer-graphic artists, model builders, editors, and animators to New Zealand.

Sure enough, during my visit to Wellington, I met dozens of Americans from universities such as the University of California at Berkeley and MIT working alongside talented filmmakers from Europe and Asia. Many had begun the process of establishing residency in New Zealand, ready to relinquish their American citizenship for what they saw as greener creative pastures. One of them, a digital wunderkind from the San Francisco Bay area, told me he was launching his new high-tech start-up in Wellington because of the technology infrastructure and environment there, which in his case created advantages that trumped even Silicon Valley. As we walked past a world map with pins stuck in employees' native countries, the head of digital animation joked that the organization looked more like the UN than a film production studio.

Think about this. In an industry synonymous with America's international economic and cultural might, film production, the single greatest project in recent cinematic history was internationally funded and crafted by the best filmmakers from around the world. But not in Hollywood.

When Hollywood produces movies, it creates jobs for directors, actors, and key grips in California. Because of the astounding level of technical innovation required by films of Rings' magnitude-in areas from computer graphics and animation to sound design-such a project also germinates whole new companies, and even new nationwide industries. George Lucas's Star Wars films, for instance, almost single-handedly sparked the advancement of everything from video games to product tie-in marketing. The lion's share of economic benefits from the Rings trilogy, though, is likely to accrue not to the United States but to New Zealand. In an equally mighty display of economic irony, Jackson's remake of King Kong is also being put together in Wellington, with a budget running upward of $150 million.

Peter Jackson's accomplishment in tiny Wellington hasn't factored into any of the ongoing debates over global economic competitiveness. But the United States of America is now facing its greatest challenge since the dawn of the Industrial Revolution. This challenge has little to do with business costs and even less with manufacturing prowess. And, no, the main competitive threats are not China or India. Our country-for generations known around the world as the land of opportunity and innovation -- may well be on the verge of losing its creative competitive edge.

The core of this challenge is what I've come to see as the new global competition for talent, a phenomenon that promises to radically reshape the world in the coming decades. No longer will economic might amass in countries according to their natural resources, manufacturing excellence, military dominance, or even scientific and technological prowess. Today, the terms of competition revolve around a central axis: a nation's ability to mobilize, attract, and retain human creative talent. Every key dimension of international economic leadership, from manufacturing excellence to scientific and technological advancement, will depend on this ability.

This new global competition for talent creates a serious threat to the United States' long-standing economic hegemony on three overlapping fronts. First, a wide range of countries around the world are increasing their ability to compete for global talent. Second, the United States is undermining its own ability to compete for that talent. And third, the U.S. is failing to cultivate and harness the full creative capabilities of its own people in ways that position it to compete effectively.