Accessibility links
Celia Cruz: Her Life and Music A Smithsonian exhibit pays tribute to Celia Cruz, the Cuban-born "Queen of Salsa." It's a chance to relish her music and sift through relics of her colorful career, including examples of costumes that came in a rainbow of hues. 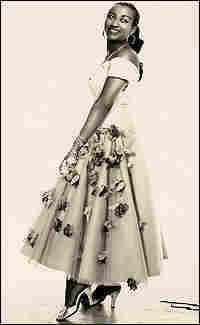 'No Me Cambie Camino,' with Ray Barretto

Video from the Exhibit 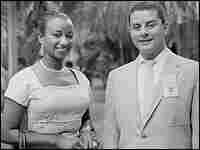 For six decades, Cuban singer Celia Cruz reigned as the Queen of Salsa. Her life and colorful career are the subject of a retrospective exhibit at the National Museum of American History in Washington, D.C.

"It is as if the earth opened her mouth to talk and to sing." That's how Marvette Perez, curator of Latino history and culture for the museum, describes the power of Cruz's music to Felix Contreras.

And her image matched. The "bigger than life clothes" Cruz enjoyed are a key element of the exhibit. The dresses on display are variations on a common theme: a style worn by rumba dancers called bata Cubana, with billowing sleeves and long, ruffled trains. The fashion is part Spanish colonial, part Afro-Cuban and 100 percent vivid.

Cruz left Cuba in 1960, believing she would return. Then she decided to settle in the United States. Two years later, her mother died, and the Castro government would not allow her to return for the funeral.

She found the style that would define the rest of her career in the 1970s, working with an upstart independent label called Fania. The Fania All Stars included such talents as Ruben Blades, Ray Barretto, Johhny Pacheco and Hector Lavoe. It was the time when the term "salsa" was coined and Celia Cruz earned the respect of its players and fans.

The exhibit is called "Azucar, the Life and Music of Celia Cruz." Azucar literally means "sugar," but as Perez notes, it served Cruz as a "battle cry" and an allusion to African slaves who worked Cuba's sugar plantations.