Accessibility links
Caring for a Husband With Alzheimer's Melissa Block continues a conversation with Tom and Joyce DeBaggio, who have lived with Alzheimer's since Tom was diagnosed six years ago. Joyce says she's had trouble coping.

Listen
Caring for a Husband With Alzheimer's

Melissa Block continues a conversation with Tom and Joyce DeBaggio, who have lived with Alzheimer's since Tom was diagnosed six years ago. Joyce says she's had trouble coping. 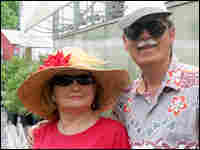 Today we continue our conversation with Tom and Joyce DeBaggio. Tom was diagnosed with early onset Alzheimer's disease in 1999 when he was 57. Host Noah Adams did a series of interviews with him then on this program over the course of a year. We went back last week to see how Tom is doing, to DeBaggio Herb Farms and Nursery in Chantilly, Virginia, the farm Tom DeBaggio started 30 years ago in his backyard. Now his son runs the nursery. Tom still goes there, still talks to customers.

Mr. TOM DeBAGGIO: People will come in and say, 'Hi, Tom,' or something. And I really don't know who I'm talking to. I can't remember who they were because I didn't know them that well. But you go back far enough, I can remember things that happened when I was a baby almost, when my parents put me into the--what was that? Well, they took me somewhere. And I can't remember where it was now. I can remember when they went to church, when they took me to church.

BLOCK: The long-term memory is stronger.

Mr. DeBAGGIO: Yeah, things like that I can still--still there. Yeah.

Tom and Joyce DeBaggio have been married for 41 years. Yesterday, we talked about Tom's experience with Alzheimer's. Today, we focus on how Joyce is coping with her husband's disease. She says the six years since his diagnosis have been uncertain times.

Ms. JOYCE DeBAGGIO: We were told not to expect anything beyond two or three years. One doctor actually said he would be a vegetable within two years.

Mr. DeBAGGIO: He was a jerk.

Ms. DeBAGGIO: But this was before--I mean, this was just at the beginning of Aricept and before Exelon and any of the other drugs. And because he had early onset, which they felt would progress faster than the type you get as you age, that he just would not be able to be functioning at all; that I should make arrangements right away for nursing homes, for care. And there's no way I'm going to plan something that far in advance. I mean, I don't know when I'm going to need to do anything. I don't know when he's going to need full-time help at home, 'cause I would like for him to stay at home as long as he remembers home. I think that's very important. But I am going to need help eventually, and it's going to be very difficult because he's not going to be very accepting as well.

BLOCK: You say you are accepting of it now, Tom?

Mr. DeBAGGIO: Yeah. I can't do anything with it. I just have somebody to take me around.

BLOCK: Joyce, I wonder if that's been a hard adjustment to make, to...

BLOCK: ...something that would seem so finite maybe that's become much more protracted for you, for you both.

Ms. DeBAGGIO: Yeah, well, either way, it's not a good scenario.

Ms. DeBAGGIO: But I have--I was used to being more independent. And now I'm not; I'm pretty trapped. Not his fault at all--I just haven't been able to adjust as well as I think I should have. My depression was very severe...

Ms. DeBAGGIO: And it's still pretty severe. But I still haven't found a way to manage in my brain.

BLOCK: With what's going on, you mean?

BLOCK: You're a printmaker.

Ms. DeBAGGIO: No, I couldn't...I couldn't do it and take care of Tom at the same time. I felt so guilty being away from him, which is something I was supposed to work on and haven't been able to. I tried meditation, lots of things. Lots of different antidepressant medications. And nothing has helped, basically. And I finally was asked to leave the Torpedo Factory.

BLOCK: That's the space where you had your studio?

Ms. DeBAGGIO: Yeah, for 24 1/2 years. And it was my life. But it became more and more difficult for me to show up, basically, which put a burden on everyone around me. And I just couldn't do it. So now my press is in storage, as all of my other things are in storage. My life is in storage.

BLOCK: One thing I was curious about was, if you look over the last four or five years, say, do you see a progression? Is there a steady course of the disease, do you think? Or has it kind of jumped around?

Ms. DeBAGGIO: It's really both. Definitely a steady progression; in the last, say, six months there's really been a drop.

Ms. DeBAGGIO: Just he's more confused about things and he understands less of what you tell him. And he's...

Ms. DeBAGGIO: ...where we start again. And that gets very frustrating. I asked him once if he could possibly understand how frustrated it is for me, and he said no, he couldn't.

BLOCK: You don't see that, Tom?

BLOCK: The frustration for her?

Mr. DeBAGGIO: I don't even think of that, 'cause I don't know what she is.

BLOCK: What do you mean?

BLOCK: So her experience of your disease is alien to you, it sounds like.

Mr. DeBAGGIO: Yeah. She can't possibly know what I'm going through. But I don't know it, either, 'cause I can't remember it.

BLOCK: Tom and Joyce DeBaggio, talking with us at DeBaggio Herb Farms and Nursery in Chantilly, Virginia. You can hear our earlier conversations with the DeBaggios and learn about Alzheimer's risk factors and treatment at our website, npr.org.