Accessibility links
The Speech Burned on Carrie Fisher's Brain Many people first encountered actress Carrie Fisher as a faded holograph image beamed from the R2-D2 unit in 1977's Star Wars. Since then, the apparition known as Princess Leia has become a dominant cultural image. Fisher remembers some choice lines in a 2004 interview with Fresh Air. 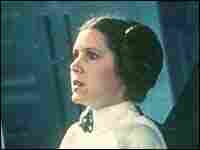 One of Fisher's key speeches as Princess Leia still has a hold on her: "I still know it. That's what's so tragic." LucasFilm/20th Century Fox hide caption

Since then, the apparition known as Princess Leia has become a dominant image associated with Fisher. She remembers some choice lines in a 2004 interview with Fresh Air, namely those from the R2D2 projection scene.

"What if I get senile and that is all the stuff that I say while drooling?" Fisher asks. "'Years ago you served my father in the Clone Wars'... That'll be my next book. Me as an old woman having them dress me as Princess Leia in the old folks' home."