Accessibility links
John Williams and the Music of 'Star Wars' John Williams was already an established composer when he took on Star Wars. That was long ago and far away, in 1976. Nearly 30 years later, he reflects on his role in the making of a cultural milestone.

Listen
John Williams and the Music of 'Star Wars' 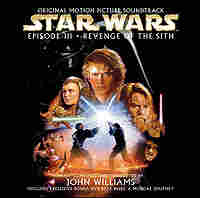 Williams says composers know they're competing with dialogue and effects for the audience's ear...

... and an example from 'The Phantom Menace' proves his point.

Williams' work on the battle between Anakin and Obi-Wan revisits earlier themes...

...as heard in this excerpt from 'Revenge of the Sith.'

Film music scholar Royal Brown says some composers just have what it takes to write for the silver screen.

From an Era Far, Far Away

John Williams was already a well-established composer when he wrote the score for the first Star Wars film. Stephen Spielberg, who had just worked with him on Jaws, recommended Williams to George Lucas. What emerged was a lush, timeless sound that defied the baser inclinations of the disco era (although a disco version of the theme did become a Billboard No. 1 hit in 1977) and recalled earlier cinema.

Through six films, Williams "has remained remarkably consistent," film music scholar Royal Brown says, while conceding: "By the time we get to 'Revenge of the Sith' it's not as fresh as it was. Not because Williams is doing anything wrong, but because he's pretty much locked into a particular requirement for this particular kind of movie."

That consistency allows fans and even casual observers of the series to make connections from film to film, reminding viewers of previous events and tying characters forever to recurring, individual themes: most notably the ominous "Imperial March" associated with Darth Vader.

Though Anakin Skywalker doesn't give himself over to the Dark Side of the Force until the final chapter of the series, Brown notes that Williams' musical foreshadowing keeps reminding the audience that it will happen -- "giving you a piece of information by the music alone."

Williams won the Academy Award for Star Wars in 1978, beating out his own score for Close Encounters of the Third Kind. Since then, Jeffrey Freymann-Weyr points out, there have been just six years when he hasn't been nominated for at least one Oscar.