Connie Briscoe's first novel is set in the Washington, DC, suburb of Prince George's County. PG County, as the locals refer to it, is home to some of the country's most affluent African-Americans. Now Briscoe has written a sequel to that novel, which once again centers on money and influence. It's titled "Can't Get Enough." The main characters are rich African-Americans living in the exclusive gated Silver Lake community.

Ms. CONNIE BRISCOE (Author, "Can't Get Enough"): (Reading) `The long driveway curved gracefully to the top of the hillside on Peacock Lane and ended at a circle decorated with a massive lighted fountain. Bradford pulled up in his silver Jaguar XK and a uniformed parking attendant opened the door on Barbara's side. The attendant extended a gloved hand as Barbara placed a satin heel down on the pavement. She was pleasantly surprised to discover a smooth black carpet beneath her foot. She had attended many glamorous affairs large and small, hosted by top government officials and Bradford's wealthy business clients, but this was her first carpeted walkway.'

GORDON: A lot of people are calling this a black version of "Desperate Housewives." Do you like that or no?

GORDON: Is the white version. What of the concern, if any, on your part that some will say there's a moral tide rising in this country and many of the themes in your book belie that when you talk about drinking and infidelity and shallow materialism and the like. Did you think about that or do you want people to see this as, look, it's just a fun read?

Ms. BRISCOE: Yeah, exactly. When I'm writing, I'm trying to write a book that's fun, that's light. I think of my books as maybe something to read during a long, relaxing weekend, when you're trying to get all your pressures and your troubles of the daily world off your shoulders and maybe something to read at the beach. Now having said that, I do try to have some sort of message or theme. And I think with "Can't Get Enough," which, as you said, is really about rich people behaving badly, I also tried to have a theme with some of the characters in showing that, you know, money is not--money, power, sex, this is what "Can't Get Enough" refers to. People can get enough of that often. I'm trying to show that those are the most important things in life, that what's important is your family and the people you have around you and how they treat you.

GORDON: I found it most interesting, and you hint on it there, the idea that through the theme of the first book and this one, it really is that material things don't solve life's problems for you.

Ms. BRISCOE: No. And I think most of us at some point in our lives hunger for these things, some more so than others. Sometimes I think that maybe it's a bigger thing with black people. And I asked--because we would often go out there, you know, we get the Benz even though we're struggling with the mortgage or maybe still living in an apartment and not a very nice apartment at that. And I asked myself why does that happen. You see this a lot in places like Prince George's County where a lot of black people have made it. The answer that I came up with is that, you know, a lot of us are actually not more than one or two generations away from poverty.

GORDON: Or one or two paychecks for that matter.

Ms. BRISCOE: Yeah. And not that much further away from slavery. So as we get it, you know, we just want more of it, because it's been denied to us for so long. We just can't get enough.

GORDON: Are any of these people patterned after folks that you know?

Ms. BRISCOE: Of course. In fact, some of the scenes in "Can't Get Enough" are taken from things that actually happened to me or things that other people had happen to them and they told me about it. I would never take a whole person from my life and plop them down into a book, but a lot of them are composites. For example, Jolene is the woman who--you know, she's living a pretty good life, but she looks at Barbara, who's living a better life, and always compares herself to someone who's doing better; you know, the sort of keep up with the Joneses type of person. Barbara is the one who really does have it all. She's married to a very successful businessman, Bradford. And on the outside they seem to have everything. On the inside she's hurting because her husband, Bradford, is a womanizer.

GORDON: Well, the book is "Can't Get Enough" and, as we have read throughout, critics are praising it and saying if you want a fun summer read, this is it. Connie Briscoe is the author and we thank you for your time.

Ms. BRISCOE: Thank you for having me.

GORDON: That does it for the program today. To listen to the show, visit npr.org. If you'd like to comment, call us at (202) 408-3330. NEWS & NOTES was created by NPR News and the African-American Public Radio Consortium. 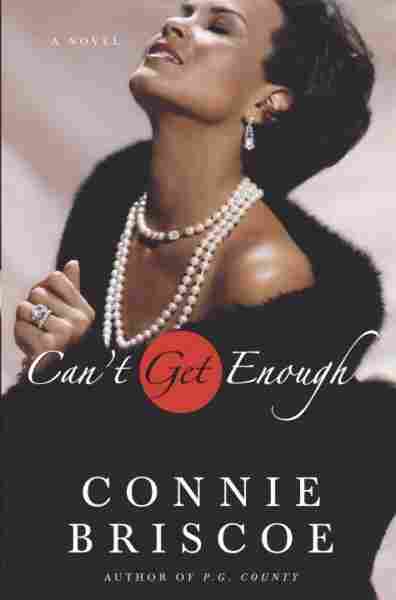