Accessibility links
'Baby Mama' Spurs Debate over Teen Motherhood American Idol winner Fantasia Barrino is climbing up the R&B charts. One of her songs, "Baby Mama," is a tribute to young, single mothers. But as her popularity grows, critics worry the song is sending the wrong message. 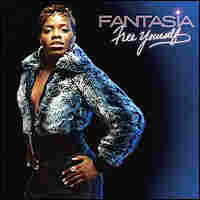 Fantasia Barrino's song "Baby Mama" has become an anthem for teen mothers. It appears on her album Free Yourself. hide caption

Washington Post columnist Donna Britt — who became a single mother at age 28 — weighs in on the debate over 'Baby Mama' and teen motherhood.

'A Chorus Of Empathy for Baby Mamas'
'In Another Era, Teen Mom Was Cautionary Tale'

American Idol winner Fantasia Barrino has two Top 20 R&B singles, and her new CD Free Yourself has sold more than a million copies.

One of her songs, "Baby Mama," is a tribute to young, single mothers -- a subject Barrino knows about. She was 17 when she became pregnant with her now three-year-old daughter.

Barrino says the song is not meant to encourage teenagers to have sex. But as her popularity grows, critics say the song is sending the wrong message.

Brenda Miller, executive director of the D.C. Campaign to Prevent Teen Pregnancy, says teenagers who become single parents are much less likely to finish high school -- and their own children are more likely to repeat the pattern.

At the same time, she and other critics, such as Washington Post columnist Donna Britt, acknowledge the need to support young mothers because of the obstacles they face.