Listen
'Sons of the Conquerors: The Rise of the Turkic World'

Robert Siegel talks with Hugh Pope of the Wall Street Journal about his latest book, Sons of the Conquerors: The Rise of the Turkic World. Pope follows the history of the Turkic people — an ethnic group covering some 140 million people in Central Asia.

Journalist Hugh Pope is Istanbul bureau chief for The Wall Street Journal. That places him in the biggest, most cosmopolitan city of modern Turkey. It also places him in the western end of a stretch of countries and regions from Southern Europe to Western China where the people are Turkic. Hugh Pope writes about some of those countries and the people who are called `sons of the conquerors.' That's the title of his book. It is about the Turks, a family of peoples who Hugh Pope says can be described in different ways.

Mr. HUGH POPE (Author, "Sons of the Conquerors"): There's many ways to cut the cake. The Turkic world is basically a group of languages, which is about 140 million people. The main countries, though, that could be described as Turkic-majority states are six: There's Turkey, Azerbaijan, Turkmenistan, Uzbekistan, Kazakhstan and the Kyrgyz Republic.

Mr. POPE: Yes. And Turkey's system of administration, of course, in the old days was a single-party state, so their cultural and their political background is not completely different from the other Turkish states.

SIEGEL: Apart from distant roots in the steppes of Asia, what do all of these countries have in common?

Mr. POPE: I think it's an informal thing rather than any political or ideological thing. It was the sum total of various things. Like, I felt there was an opportunistic genius in the way people behaved. I found the physical similarities, I found cultural similarities and, of course, linguistic similarities. And it's quite an amazing thing for someone like myself, who had learned Turkish in Istanbul, and I take a flight six hours east to Urumqi in China, get out of the plane and, with very little preparation, can speak to people in the street.

SIEGEL: You're speaking, in that case, to people who were members of the Uighur minority.

Mr. POPE: That's correct, yes, the Uighurs of Xinjiang, about eight million people in that territory, which is one-sixth of China's landmass. And there's still half of the population there, although, of course, a drop in the ocean of Han Chinese in the whole of China.

SIEGEL: Nothing sums up the problematic self-image of the Turks than the story of the word `Turk' itself, which is--which didn't mean the same thing a hundred years ago that it means today. And there are all kinds of connotations that we would consider, both negative and not descriptive, of the people who live in Turkey.

Mr. POPE: It's an extremely complicated word, many things bundled up into it. But one thing that we tend to forget about the word `Turk' is that a thousand years ago, it was already being used in Central Asia to define the joint characteristics of the various different Turkic groups and tribes. And it has its deep-rooted legitimacy in the eyes--in Turkish. Now, of course, over the centuries, it became diluted and especially in the Ottoman Empire, where the Ottoman court developed a different culture and--initially based on Persian culture and then later based on French culture in their government.

SIEGEL: And the Ottoman gentlemen would regard a Turk as some kind of rube who lived out in the countryside.

Mr. POPE: Precisely. And that's also the case in countries like Iran today, where any Persian's reaction to the idea of a Turk is Turkish donkey. You see it on the Web sites, you see it in literature and it's because the Turks, as Turks, are uneducated. That culture has never been developed. But now with six different independent states all trying to create new Turkic identities--I call them Turkic; they would call it Uzbek or Turkman, but it is Turkic. And even if you ask someone like President Nazarbayev, `What are you?' and his first answer's...

SIEGEL: He of Kazakhstan.

Mr. POPE: Yeah, the president of Kazakhstan. He says, `I am a Turk.' And you look at him slightly oddly because Turk now means a citizen of Turkey. He says, `No, not like that. We sent armies from here 500 years ago, a thousand years ago, to conquer Turkey. They married the local population, and now they're called Turkey. But the real Turks are still here in Central Asia, and it's us.'

Mr. POPE: Politically, not a high profile at the moment. I think the big change from a century ago--the great game you refer to when the Russian Empire and the British Empire famously competed--is that the local states now mean something. In the old days, no one really paid much attention to the Kazakh Hans or the Uzbek tyrants that they met there. But now these countries have their own identities. They've managed to find a way of balancing themselves between the great players of Russia, China. So I think that that has changed, that the great game is a somewhat more complex game in which the Turkic countries and Turkic peoples have more space.

But having said that, Turkey enters--it enters, by its own desire, a step back from having a strong political big brother role. It wasn't wanted, and it caused problem. Turkey's completely eclipsed Iran and those countries because of simple matters of commerce. Turkish businessmen are the single biggest community of businessmen in any of these Turkic capitals.

SIEGEL: Turkey, until a couple of centuries ago, was a great imperial power; had controlled the Balkans, a good deal of Southeastern Europe and lots of other lands, the Middle East, and finally was reduced, after the First World War, to its current state, the rump state of Turkey. You observe at some point it is not unusual to talk with Turks about the decline, the sense of, `What's wrong here?' This is a preoccupation in Turkish discourse.

Mr. POPE: Yes. There's a sense of inferiority and a sense of--that the world has turned against them. In fact, the last two centuries have seen rather less than conquests; it's mainly seen Turks being turfed out of the bases that they conquered, and that's one of the reasons that Turkey has been such a defensive kind of country and perhaps even a militarist kind of country in a defensive way but prickly and worried about losing more territory, being divided up. I think America is suffering from this right now because the Turks are convinced that America is trying to create an independent Kurdistan in Iraq, and they see that as an extension of the European 19th-century efforts to divide the Ottoman Empire.

So, yes, they do remember that very clearly. And you see it, too, in the Turkic world. Azerbaijan obviously lost territory in Nagorno-Karabakh to Armenia, and that memory is a very live one and influences the way Turks view the world now.

SIEGEL: Mm-hmm. That the West, given a chance, will hive off lands off of what Turks regards as theirs.

Mr. POPE: Indeed, yes. And historically ,that has been the trend.

SIEGEL: Well, Hugh Pope, thank you very much for talking with us today.

SIEGEL: Hugh Pope is the author of "Sons of the Conquerors: The Rise of the Turkic World." 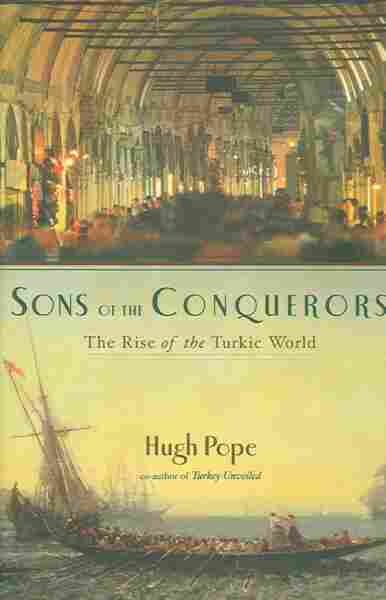 Sons Of The Conquerors

The Rise of the Turkic World