Listen
'Everything Bad Is Good for You'

Are Americans getting dumber or smarter? Author Steven Johnson discusses his book Everything Bad Is Good for You. He argues that the complexity of modern TV shows and video games might make today's media consumer sharper than those of 30 years ago.

The author Steven Johnson argues that even as our culture seems to get dumber, Americans are getting smarter. IQ scores have been rising for generations, even though the last few generations have burned out their eyeballs watching television, playing video games and now surfing the Web. Johnson contends there's a connection. He's written a book called "Everything Bad is Good for You." He argues that mass culture makes us think more than it used to.

Mr. STEVEN JOHNSON (Author, "Everything Bad is Good for You"): Certainly, if you look at the popular dramas and compare any number of shows, starting with "The Sopranos" but going all the way through "Alias," which has been a pretty solid hit, and "West Wing" and "ER," to not just to the dramas of 1977--I mean, it's an easy comparison to look at "Starsky and Hutch," and say that they've grown more complex--but look at a show like "Hill Street Blues" that came along in 1981 and introduced multiple characters and introduced all these multiple plot lines. And "Hill Street Blues" had an immensely difficult time finding an audience. In its first year, it finished basically dead last, and eventually in 1985, NBC literally issued a press release saying, `We give up. This show is too complicated. We're going to make it easier for you to follow.' Now we have shows that are regularly twice as complicated in terms of the mental demand that they make on their audience, and yet those shows are huge hits.

Mr. JOHNSON: "Stacked"? I have not seen it, actually. You know, the problem is, there are definitely some genuinely lame things on television, and there's more at the bottom of the barrel, because the barrel in a sense has gotten bigger. See, and you have to remember how bad the TV was. Everybody points to, you know, `Oh, I remember "M*A*S*H" and "Mary Tyler Moore," but nobody ever really remembers, you know, "Dukes of Hazzard" or "CHiPs," you know.

Mr. JOHNSON: There were some terrible, terrible shows. And that's what I was growing up on. I mean, I remember what it was like to have to watch "Joanie Loves Chachi," and anybody who doesn't get this argument, I really encourage them to go sit and watch, you know, some of these old shows, and you'll be amazed at how predictable, how formulaic they are, how they just follow these really reliable patterns and how little information there is per scene compared to what you'll see on even a mediocre show from today.

Mr. JOHNSON: Yeah. One of the things that I do in the book to demonstrate the way things have changed is chart the social network that you have to make sense of and follow to take in an episode of "Dallas" vs. an episode of "24." This is an important part of what it means to be intelligent, your ability to map a social network. When you go in to work and you're keeping track of who's feuding with who and who's making nice with the boss and who's maybe flirting with you a little bit. People who are good at that kind of social network mapping tend to be successful in life. Now in one episode of "Dallas" from season one, there basically are six major characters, three kind of peripheral characters and two almost walk-on kind of parts, and that was a complicated network.

Mr. PATRICK DUFFY: (As Bobby Ewing) J.R., look around here. What do you see?

Mr. DUFFY: (As Bobby Ewing) You don't know why April's dead, do you? It's because of money and oil, the very thing that built this company.

Mr. JOHNSON: Fast-forward 30 years and look at a show like "24," and in one episode from season one, there are 31 separate characters, four distinct families and dozens of interrelationships between all these characters that are essential to follow if you're going to make sense of "24."

Ms. SARAH CLARKE: (As Nina Myers) Everyone. We're just waiting for Walsh. I've activated a satellite uplink in case he needs one.

INSKEEP: Are you saying that television or video games or other media are helpful just if they make our minds work doing anything, even if what we're doing is rather inane or irrelevant to real life?

Mr. JOHNSON: Well, what I'm trying to argue is that the content is sometimes the least interesting thing about pop culture and that there is virtue in just having kind of the mental exercise of solving these puzzles or keeping track of these complex structures. And the analogy I would give you is to chess, really. I mean, the game always ends the same way. It's a very predictable narrative system, chess. But we agree that there's something positive about the mental exercise you get from playing chess.

INSKEEP: At the same time, the argument can be made by some that different kinds of television shows and the Internet and so forth are shrinking all of our attention spans.

Mr. JOHNSON: I'm not talking about multitasking here. Multitasking is sitting in front of your computer and listening to your iPod and doing your homework and watching TV out of one corner of your eye.

INSKEEP: Which is what so many of us are doing all the time.

Mr. JOHNSON: So--yeah, and that's certainly happening in this society, and we've gotten better at that kind of juggling, and there may be some problems when we try and focus on a single task. But the complexity in the pop culture that I'm talking about is a different phenomena, and that is the phenomena of actually focusing on multiple pieces of information and making them connect to each other in a meaningful way.

INSKEEP: Do you think people are affected at all by the content?

Mr. JOHNSON: Yes, I do think they are. And, for instance, "24," a show that I think is really interesting in terms of the formal complexity of it, has a real propensity to show these casual, you know, episodes of torture that I object to. I have problems with the violence and the torture on "24." What I'm trying to say is that that's not the only story, and I think that the cognitive complexity is as important.

INSKEEP: You know, we're interviewing the author of another book who has coined the term `nature deficit disorder,' arguing that children in particular are spending far too much time in front of televisions, video games, the Internet, you name it and never getting out to the outdoors to watch something that, on the surface at least, is less intricate, like a tree.

Mr. JOHNSON: You know, I have two little boys, and we moved right next to Prospect Park in Brooklyn to be able to take the kids out for a big ramble in the woods, you know, and that's an important part of being a kid, and I absolutely think that it's important to have balance in all of these things. And if your kids are sitting around on the couch all day, you should definitely be encouraging them to go outside. The key point here is, again, this idea of a trend, right? If we were sitting around 30 years ago reading "Middlemarch" and then going on nature hikes all day, I would say yes, it has gotten worse. But we weren't doing that. We were sitting around watching "CHiPs" and "The Love Boat." Now we still should encourage kids to do other things, but we should be psyched that they seem to be reaching for more challenging things than they were reaching for when I was a kid.

Mr. JOHNSON: Well, the oldest one is not even four yet.

Mr. JOHNSON: But, you know, he gets up in the morning and he goes downstairs and he pops open my wife's PowerBook and he pulls down his user account and he types in his password and he launches the Web browser and he goes to sesamestreet.org, and he starts playing these interactive games. He can barely draw a circle, but he's, you know, logging into his Unix account, basically. So that interactive world is going to be several years more kind of innate feeling to him than reading and writing are. So this is the world he's been born into.

INSKEEP: Steven Johnson is the author of "Everything Bad is Good for You." Thanks very much. 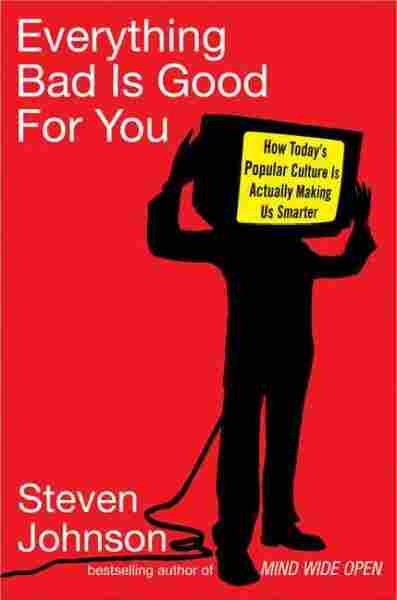 Everything Bad Is Good For You

How Today's Pop Culture Is Actually Making Us Smarter