Accessibility links
Saving Kids from 'Nature Deficit Disorder' Author Richard Louv talks about his new book, Last Child in the Woods: Saving Our Children from Nature Deficit Disorder. Louv argues that kids are so plugged into television and video games that they've lost their connection to the natural world.

Author Richard Louv talks about his new book, Last Child in the Woods: Saving Our Children from Nature Deficit Disorder. Louv argues that kids are so plugged into television and video games that they've lost their connection to the natural world.

Yesterday at this time, we heard from an author who argued that television and video games can be good for you. This morning, we have an argument for nature. The author Richard Louv says children are spending more time indoors, and when they do go outside, they're most likely to be on their way to soccer practice or some other structured activity. The result, he says, is that kids are out of touch with fields, streams and woods. Louv calls this condition nature deficit disorder.

Mr. RICHARD LOUV (Author, "Last Child in the Woods"): Our kids are actually doing what we told them to do when they sit in front of that TV all day or in front of that computer game all day. The society is telling kids unconsciously that nature's in the past. It really doesn't count anymore, that the future is in electronics, and besides, the bogeyman is in the woods.

INSKEEP: Is some of this change just basic reality? When you talk about people being afraid of nature, afraid of the terrible things that can happen, afraid of what might happen to their children if you let them roam freely from home, I mean, these are fears that people have.

Mr. LOUV: Perception of fear is real. The causes of fear are less real. The actual number of stranger abductions have been going down over the last many years, but the perception is strong. And I acknowledge that I felt that as a parent raising my kids. So I suggest that they send their kids out into the woods with a cell phone. I mean, I don't like doing that, but there are ways to deal with the fear. But in terms of reality, there's a hypothesis called the biophilia hypothesis. And basically the idea is that biologically we are still hunters and gatherers and we need, at some level we don't fully understand, direct involvement in nature. We need to see natural shapes in the horizon. And when we don't get that, we don't do so well.

INSKEEP: We should stress here, I suppose, it's hard to prove that kids are really spending less time in nature.

Mr. LOUV: Well, a lot of this is circumstantial and anecdotal evidence, but you're right. There's not a lot of research out there, and that's part of the problem. We've studied just about everything else how it affects childhood but we've not looked at this elephant in the room, this thing that we all acknowledge is a major part of life.

INSKEEP: There is something that's very natural, if you'll pardon the pun, about your argument here, but we've also been talking to the author of another book called "Everything Bad Is Good For You," in which he argues that although we instinctively don't like the idea of kids playing video games, spending all day watching television, spending time in front of the computer and so forth, that these other activities make kids think in faster and smarter ways, that they actually do help their development.

Mr. LOUV: I do not trust technology. I mean, I don't think we're in any danger of kids, you know, doing without video games in the future, but I am saying that their lives are largely out of balance. And, yes, video games may stimulate certain kinds of intelligence, but what about the full use of the senses? When you're sitting in front of a screen, you're not using all of your senses at the same time. Nowhere than in nature do kids use their senses in such a stimulated way.

Mr. LOUV: First, don't assume that you have to go to Yosemite. I mean, there's a lot of nature in most people's back yards. Leave part of the yard rough. Don't manicure everything. Small children in particular love to turn over rocks and find bugs, and give them some space to do that. Take your child fishing. Take your child on hikes.

INSKEEP: I'm just thinking about the psychology of a child which can be so challenging for many parents, what the parent wants the kid to do, the kid by his nature or her nature as a young person will maybe resist or not be so excited. And do you remember an occasion when you as a child fell in love with nature and how that happened?

Mr. LOUV: Why, from the very earliest I can remember that. And I think that how I received that was through my parents' own enthusiasm for nature and I think that's a very important point and it's an important point that you made. I mean, you can force kids out there because they'll rebel against it. That's why it's so important for parents to find their own enthusiasm and discover nature with their child. My parents took us fishing. And I'll tell you there's nothing that stimulates the senses like hearing your mother swear quite a while after she's lost a fish. I mean, it's an exciting experience.

INSKEEP: Richard Louv is the author of "Last Child in the Woods." It argues that children suffer from he calls nature deficit disorder. 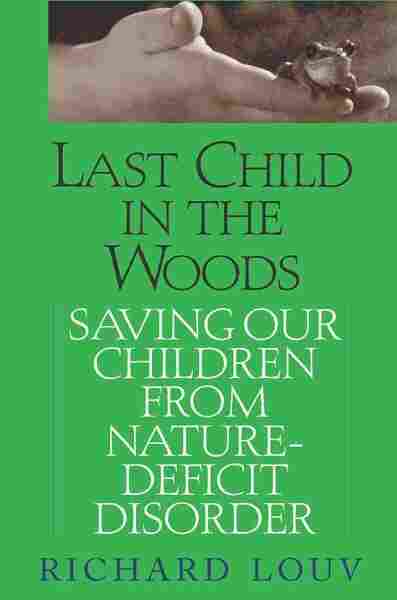 Last Child In The Woods

Saving Our Children From Nature-Deficit Disorder