Accessibility links
An Artichoke and Goat Cheese Starter Food blogger Clotilde Dusoulier shares a recipe for an artichoke and goat cheese mille-feuille, an easy and elegant starter for a late spring meal.

An Artichoke and Goat Cheese Starter

An Artichoke and Goat Cheese Starter 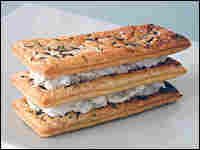 Clotilde Dusoulier is the 25-year-old Parisienne behind the popular food blog Chocolate & Zucchini. She is working on her first cookbook.

Fresh artichokes were often on the menu at my parents' house during their peak season (May-July). My mother would cook four globe artichokes (in France, that variety is called artichaut camus and is grown mainly in Brittany) in the pressure-cooker and whisk up a thick and velvety vinaigrette to serve as a dipping sauce.

We would then proceed to eat the artichokes, leaf by leaf, dipping them in the vinaigrette with our fingers, scraping at the sweet, fleshy tips with our teeth, and discarding the leaves into a large bowl in the middle of the table. My parents tell me that when I was very young, I seemed to find this too much work and often lost interest just before reaching the heart of the artichoke -- leaving the tastiest part for the rest of the family to share.

I know better now of course, and artichoke hearts are among my all-time favorite ingredients -- you know the kind, the ingredient guaranteed to make you choose whichever dish features it on a restaurant menu.

I also love cooking with artichokes and was inspired to create this recipe for artichoke and goat cheese mille-feuille. What could be more fitting, considering that the literal meaning of mille-feuille is "a thousand leaves"?

Mille-feuille (pronounced "mill-fuh-yuh") is originally a classic French pastry, in which layers of puff pastry are stacked together with layers of vanilla custard (crème pâtissière). Over time, the term -- like a handful of other dessert names -- has crossed over to the savory side and is now often used for dishes in which several ingredients are layered on top of one another.

This mille-feuille recipe consists of rectangles of puff pastry flavored with a little thyme and fleur de sel, and layered with a mix of artichoke hearts and mild goat cheese. (I commend the bakers who make their own puff pastry: I simply buy it at the grocery store or order it from the bread bakery, as is customary in France.)

It will make for a sophisticated and fresh first course for your late spring and early summer dinners. Pairing wine with artichoke is notoriously tricky, but here a light Sauvignon or a Riesling (from Alsace if possible) will work wonders.

(Serves 4 as a first course)

4 fresh globe artichokes (look for firm artichokes that feel heavy for their size, evenly colored and free of blemishes, with their leaves tightly closed) *

the juice from half a lemon

one sheet of puff pastry, thawed according to package directions

Fill a bowl with enough water to cover the artichoke hearts, pour in the lemon juice and set aside. For each artichoke, snap off the bottom stem and then trim the tough leaves at the base and the tops of the leaves at the artichoke's tip, roughly one-third. Remove the rest of the leaves carefully until you reach the choke, a dome of inedible fibers that protect the artichoke heart. Scrape it out with a melon baller or a spoon, taking care not to damage the heart underneath. Place the heart in the bowl of lemon water to prevent it from browning while you work on the rest of the artichokes.

Place the artichoke hearts, the fresh goat cheese and two teaspoons of olive oil in a food processor and pulse until combined but still slightly chunky. (This can also be done by hand with a fork.) Cover and refrigerate until ready to assemble.

Preheat oven to 350°F. Line a cookie sheet with parchment paper and set aside. Draw a 1.5'' x 4'' rectangle on a sheet of paper and cut it out. On a floured surface, gently roll the sheet of puff pastry to 10" x 11" or 12" rectangle. Use the paper rectangle as a guide to cut out 12 equal pastry rectangles with a sharp knife.

Transfer the pastry rectangles onto the cookie sheet, leaving them a little room to expand. Prick the rectangles with the tines of a fork (to prevent the dough from rising too much as it bakes), brush the rectangles with olive oil, and sprinkle lightly with thyme and fleur de sel. Put into the oven to bake for 10-12 minutes, until puffy and golden. Turn out on a rack to cool.

Put two rectangles of pastry on a work surface. Spread each of them with a rounded tablespoon of filling, working carefully so as not to break or damage the pastry. Put them one on top of the other, top with a third rectangle and set aside. Repeat with the remaining rectangles and filling.

Serve immediately, with a few plum tomatoes (stem-on for a prettier effect) and a drizzle of vinaigrette.