Accessibility links
White House Pledges $50 Million in Aid to Palestinians Palestinian President Mahmoud Abbas meets with President Bush at the White House in a bid to bolster relations with the United States and advance the peace process with Israel. Abbas came away from the meeting with a U.S. pledge of $50 million in aid for the Palestinian Authority.

Palestinian President Mahmoud Abbas meets with President Bush at the White House in a bid to bolster relations with the United States and advance the peace process with Israel. Abbas came away from the meeting with a U.S. pledge of $50 million in aid for the Palestinian Authority. 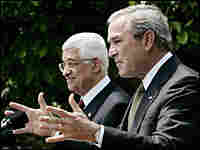 President Bush speaks during a joint news conference with Palestinian President Mahmoud Abbas in the Rose Garden of the White House in Washington. Reuters hide caption

At the White House today, President Bush gave Palestinian President Mahmoud Abbas a crucial boost. It came in the form of money to help the Palestinian government and a pledge that the US will remain committed to the road map peace plan after Israel's planned withdrawal from the Gaza Strip in August. From the White House, NPR's David Greene reports.

At a Rose Garden news conference after their talks, Mr. Bush spoke to his counterpart as an equal, calling him `Mr. President.' The US leader never showed that kind of respect for Abbas' predecessor, the late Yasser Arafat.

President GEORGE W. BUSH: Mr. President, it is my honor to welcome the democratically elected leader of the Palestinian people to the White House.

GREENE: Mr. Bush said he was sending $50 million in aid to the Palestinian Authority to pay for housing improvements and infrastructure in Gaza. It's money already approved by Congress, but there was symbolic importance to the gesture. He said he's sending the money directly to Abbas' government. Many lawmakers in Congress have put restrictions on aid, saying it must go through third parties and non-governmental organizations. Mr. Bush's message was that Abbas has put enough reforms in place that the US government can now treat his government as a partner.

Pres. BUSH: We will stand with you, Mr. President, as you combat corruption, reform the Palestinian security services and your justice system and revive your economy. Mr. President, you have made a new start on a difficult journey requiring courage and leadership each day, and we will take that journey together.

GREENE: But as Abbas takes that journey, he said he is hitting obstacles. Steps to combat terrorism and make democratic reforms, he said, are more difficult when his people feel they are occupied. He complained that Israel has tied his hands and was not promoting freedom for Palestinians by continuing to expand some settlements in the West Bank. Speaking through an interpreter, Abbas said that activity by the Israelis is threatening peace more than anything else

President MAHMOUD ABBAS (Palestinian Authority): (Through Translator) Stopping this is one of the requirements of the road map. Time is becoming our greatest enemy. We should end this conflict before it is too late.

GREENE: President Bush did not disagree, and in a statement sure to be helpful to Abbas when he returns home, Mr. Bush forcefully repeated the US position that Israel must end settlement expansion. Mr. Bush said emphatically that his government is ready to re-engage both sides on the road map once Israel withdraws from Gaza.

But he also put some onus on Abbas. Once the Israelis withdraw, he said, and once the Palestinians show they can begin setting up a viable government, that will be the time to put more pressure on Israel to halt settlements.

Pres. BUSH: And so there will be a series of issues that come up--you know, `How do we deal with this issue? How do you deal with that issue?'--all of which will become easier to deal with as the government succeeds in Gaza. And the United States stands with the government, to help them succeed.

GREENE: Mr. Bush was asked bluntly by a reporter if Abbas should be forced to dismantle Hamas, the militant Islamist organization that has candidates running in Palestinian parliamentary elections later this year. The president repeated that Hamas is considered a terrorist group by the US government for a reason. But he said he was hopeful that the Palestinian people would make that assessment themselves.

GREENE: After the news conference, Mr. Bush invited Abbas into the White House residence for lunch. Abbas said he was leaving Washington after fulfilling an objective: Getting more support from the United States as he begins a tough few months ahead. David Greene, NPR News, the White House.