Accessibility links
Making an Animated Escape to 'Madagascar' Dreamworks' latest film Madagascar opens this weekend. The digitally animated comedy is about a bunch of pampered New York City zoo animals that wind up in the wilds of Madagascar.

Dreamworks' latest film Madagascar opens this weekend. The digitally animated comedy is about a bunch of pampered New York City zoo animals that wind up in the wilds of Madagascar. 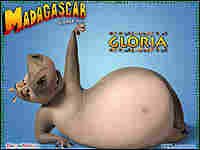 Gloria, voiced by Jada Pinkett Smith, knows how to throw her weight around as a calming influence on the runaway zoo animals. Dreamworks hide caption

The animated film "Madagascar" opens this weekend. It's about a bunch of pampered New York City Zoo animals who wind up in the wilds of Madagascar.

Unidentified Man #1: You must tell me, who the heck are you?

Mr. BEN STILLER: (As Alex the Lion) I'm Alex, and this is Gloria, Marty and Melman.

Unidentified Man #2: And just where are you giants from?

MONTAGNE: DreamWorks wanted the film to resemble the hand-drawn cartoons of the 1940s and '50s, a lot harder than it sounds in this age of 3-D digital animation. Here's NPR's Laura Sydell.

Unidentified Voice: You're my favorite deputy.

Ten years ago, "Toy Story" became the first feature-length animated film done entirely on a computer. The movie introduced audiences to a 3-D world unlike anything they had seen before. A child's toys came to life.

Mr. TIM ALLEN: (As Buzz Lightyear) Toy? Excuse me. I think the word you're searching for is space ranger.

SYDELL: When "Toy Story" was released, filmmakers at Pixar Animation feared that audiences might be bored watching the somewhat robotlike movements of computer-generated, or CG, characters. They needn't have worried. "Toy Story" became the highest-grossing film of 1995. Other CG features followed produced by Pixar and other studios.

Mr. BILLY CRYSTAL: (As Mike Wazowski) I've never seen anything like you today. You are on a roll, my man.

Mr. JOHN GOODMAN: (As James P. Sullivan) Another day like this and that scare record's in the bag.

SYDELL: Remember, there was a trade-off for immersing audiences in this 3-D animated world.

Mr. REX GRIGNON (Character Animation, "Madagascar"): You know, we couldn't even bend things in the early days. You had to have rigid objects like a robot.

SYDELL: Or, like a toy. Rex Grignon is head of character animation for DreamWorks' latest feature, "Madagascar." Computer animators have always faced certain challenges when it comes to creating truly believable characters, he says.

Mr. GRIGNON: What we get at the start is--you know, we sometimes jokingly call the roadkill characters, like a character whose arms are straight out, his eyes are wide and neutral, and you can look at that and kind of think, `Wow. That character doesn't have much life.'

SYDELL: It was very different back more than half a century ago when classic animators like Chuck Jones and Bob Clampett brought Bugs Bunny and Daffy Duck to life. With the stroke of a pencil, they could create emotional reaction on a character's face.

SYDELL: But making eyeballs pop is not so easy on a computer, says Robert Vogt, a character supervisor on "Madagascar."

SYDELL: Vogt sits at his computer at the DreamWorks animation facility in California's Silicon Valley. On his screen is a single frame of the character Alex the Lion with a mathematical grid over his face and a big, bulging eyeball.

SYDELL: Computer animation uses a system that's based on muscles and math. If an eye bulges or an arm stretches out in an unrealistic cartoonish way, other muscles react by moving along with it. The animators had to figure out how to pop out an eye without sliding down an ear. The techy term for this? Squash and stretch. To explain how it works, Vogt takes a scene of Alex the Lion in "Madagascar" discovering his true, wild lion nature.

SYDELL: Vogt stops the action and explains it frame by frame.

Mr. VOGT: So here he is. He's leaping off of one rock and you'll notice he's stretched his body and face as he's leaving that rock. And when he gets about halfway through his trajectory, he's tightened himself up into this tiny little cannonball using squash and stretch in a way to create momentum and fluidity between the poses.

SYDELL: It took DreamWorks animators months to figure out just how much stretch, sometimes referred to as the sheer factor(ph), and how much squash. It's often done in just one frame, and the audience is hardly aware it's happened says chief character animator Rex Grignon.

Mr. GRIGNON: The goal is how far can we push it but still have it feel like it's always the same character? And we realize this is just incredible. This is something that we had never been able to do in the past other than on paper.

SYDELL: Pushing squash and stretch further is a small step in the young art form of computer animation, which Grignon says advances slightly with each new feature film.

Mr. GRIGNON: We've been knocking off these things that have been really difficult. Water's always been very difficult, fur, hair, clothing.

SYDELL: Of course, some may wonder, `Why not go back to the drawing board?' Grignon says with new technologies, it's possible to produce features that bring together the best of the old and the new.

Mr. GRIGNON: You know, when you watch a drawn cartoon, to me it's always like you're looking at a painting. In 3-D, I feel like you're able to walk into the painting another level, and I'm sure in the future it'll go even more beyond that.