Accessibility links
Danica Patrick Aims to Make Indy 500 History Danica Patrick, 23, became an instant celebrity when she qualified for this Sunday's Indianapolis 500. Patrick is just the fourth woman to qualify for the "Greatest Spectacle in Racing" -- but unlike her predecessors, experts say she has a real shot at winning. 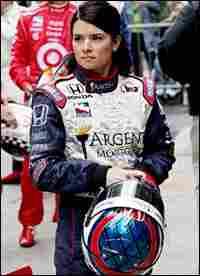 Danica Patrick, 23, is the fourth woman to compete in the Indianapolis 500. Above, she's pictured at a press event in New York, May 23, 2005. Mike Segar/Reuters hide caption 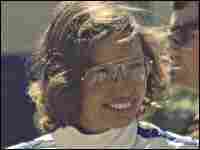 Janet Guthrie, pictured above on the cover of her new memoir, became the first woman to crack the field at the Indianapolis Motor Speedway in 1976. hide caption

toggle caption
Hear Guthrie Discuss Her Memoir and Her Experience at the Indy 500 May 27, 2005

Danica Patrick, 23, became an instant celebrity when she qualified for this Sunday's Indianapolis 500, finishing higher than any other woman in the race's history.

Patrick is just the fourth woman to qualify for the "Greatest Spectacle in Racing" -- but unlike her predecessors, experts say she has a real shot at winning.

Since rookie orientation began on the raceway May 5, Patrick has been among the fastest of drivers. She posted the fastest practice speed at Indy this month -- around 229 miles an hour -- and would have qualified first if not for briefly sliding sideways during her run.

Instead, Patrick settled for fourth in the 33-car field -- the highest qualifier by any woman in the race's 89-year history. But she says she has the experience to reach the front of the field.

"I know what it's like out there," Patrick says. "I know how these guys think, and for the most part, we're all thinking the same thing -- that we want to go win, and we want to be the fastest car on the track. So we're all the same."

In 1976, Janet Guthrie became the first woman to qualify for the race. She finished ninth. Later came Lyn St. James and Sarah Fisher.

As Quinn Klinefelter of Detroit Public Radio reports, many fans and media are already treating Patrick like she's won the 500.

In 1906, former bicycle racer Carl Fisher founded the Indianapolis Motor Speedway -- in part, as a place where automakers could test their vehicles. The speedway was built in 1909 on 328 acres of farmland five miles northwest of Indianapolis.

Fisher sold the track in 1927 to a group led by World War I flying ace Eddie Rickenbacker. But the Great Depression took a toll, and during World War II, the Indy 500 was suspended.

Ready to get out of the auto-racing business, Rickenbacker sold the famous rectangular-oval, 2.5-mile track in 1945. Its buyer, Anton Hulman, spent millions to upgrade the facility, dubbing the Indy 500 the "Greatest Spectacle in Racing.'' The race has been held every year since 1946.