Accessibility links
An Ideal of Service to Our Fellow Man From 1954, Nobel Prize-winning physicist Albert Einstein finds beauty in life's mysteries, and says the fate of mankind depends on individuals choosing public service over private gain. 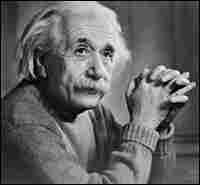 Albert Einstein published his general theory of relativity in 1916, profoundly affecting the study of physics and cosmology for years. He won the Nobel Prize for Physics in 1921 for his work on the photo-electric effect. Einstein taught for many years at the Institute for Advanced Study at Princeton.

The most beautiful thing we can experience is the Mysterious — the knowledge of the existence of something unfathomable to us, the manifestation of the most profound reason coupled with the most brilliant beauty. I cannot imagine a God who rewards and punishes the objects of his creation, or who has a will of the kind we experience in ourselves. I am satisfied with the mystery of life's eternity and with the awareness of — and glimpse into — the marvelous construction of the existing world together with the steadfast determination to comprehend a portion, be it ever so tiny, of the reason that manifests itself in nature. This is the basics of cosmic religiosity, and it appears to me that the most important function of art and science is to awaken this feeling among the receptive and keep it alive.

I sense that it is not the State that has intrinsic value in the machinery of humankind, but rather the creative, feeling individual, the personality alone that creates the noble and sublime.

Man's ethical behavior should be effectively grounded on compassion, nurture and social bonds. What is moral is not the divine, but rather a purely human matter, albeit the most important of all human matters. In the course of history, the ideals pertaining to human beings' behavior towards each other and pertaining to the preferred organization of their communities have been espoused and taught by enlightened individuals. These ideals and convictions — results of historical experience, empathy and the need for beauty and harmony — have usually been willingly recognized by human beings, at least in theory.

The highest principles for our aspirations and judgments are given to us westerners in the Jewish-Christian religious tradition. It is a very high goal: free and responsible development of the individual, so that he may place his powers freely and gladly in the service of all mankind.

The pursuit of recognition for their own sake, an almost fanatical love of justice and the quest for personal independence form the traditional themes of the Jewish people, of which I am a member.

But if one holds these high principles clearly before one's eyes and compares them with the life and spirit of our times, then it is glaringly apparent that mankind finds itself at present in grave danger. I see the nature of the current crises in the juxtaposition of the individual to society. The individual feels more than ever dependent on society, but he feels this dependence not in the positive sense — cradled, connected as part of an organic. He sees it as a threat to his natural rights and even his economic existence. His position in society, then, is such that that which drives his ego is encouraged and developed, and that which would drive him toward other men (a weak impulse to begin with) is left to atrophy.

It is my belief that there is only one way to eliminate these evils, namely, the establishment of a planned economy coupled with an education geared towards social goals. Alongside the development of individual abilities, the education of the individual aspires to revive an ideal that is geared towards the service of our fellow man, and that needs to take the place of the glorification of power and outer success.

Translation by David Domine. Essay courtesy of the Albert Einstein Archives at The Hebrew University of Jerusalem.