Accessibility links
Recycling to Survive in Sudan In Southern Sudan, international aid is being put to full use, and so are the shipping materials. The Sudanese are converting the packaging from international food aid and other supplies into necessities such as ropes, furniture, and kitchen utensils.

Listen
Recycling to Survive in Sudan

In Southern Sudan, international aid is being put to full use, and so are the shipping materials. The Sudanese are converting the packaging from international food aid and other supplies into necessities such as ropes, furniture, and kitchen utensils. 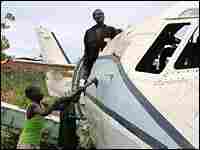 Workers at an airstrip in Rumbek, in South Sudan, hack apart the fuselage of an old transport plane with axes. Later the aluminum will be recycled into cooking pots. Jason Beaubien, NPR hide caption 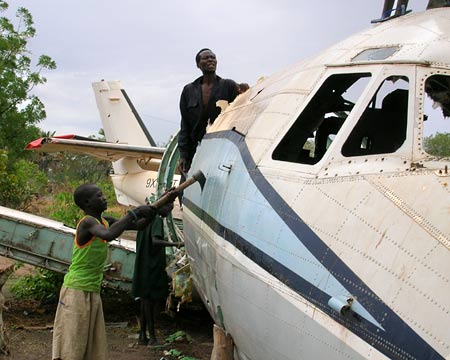 Workers at an airstrip in Rumbek, in South Sudan, hack apart the fuselage of an old transport plane with axes. Later the aluminum will be recycled into cooking pots.

As United Nations Secretary-General Kofi Annan tours Darfur today, bringing attention to the humanitarian crisis there, international aid is pouring into southern Sudan, to help that area rebuild after 22 years of civil war. South Sudan is one of the least developed and least accessible parts of Africa. Because of its isolation, it is a place where nothing goes to waste. The recent influx of food aid and supplies has brought with it an added bonus: grain bags, oil tins and other packaging that elsewhere might have just ended up in a garbage dump. NPR's Jason Beaubien reports from the town of Rumbek.

Under a peace deal to end Sudan's two-decade-long civil war in southern Sudan, Rumbek is going to be the new capital of the south. It will be one of the least developed capitals in the world. There's no electricity, no phones. The only vehicles in Rumbek belong to the international aid agencies. Occasionally, a dilapidated truck rumbles in from Uganda. In the market, traders sell raw tobacco, corn and charcoal, small pyramids of rock salt and simple consumer goods such as matches that came in on the truck from Uganda. In one corner of the market, five men are taking apart grain bags strand by strand.

Mr. MELONG MENOWZI(ph): They're making rope for cows and sheep and goats.

BEAUBIEN: Melong Menowzi's uncle is one of the men turning the grain sacks into livestock leads. The bags originally held food donated by international relief agencies. These modern-day versions of the burlap bag are woven by machine from flat, thin strands of synthetic material. The men in the market painstakingly disassemble the strips and then braid them back together into a finger-thick rope.

Mr. MENOWZI: They make these bags into rope, because there's no rope here, especially a strong rope here. It is a good rope; it is very strong.

BEAUBIEN: The men also make fly-swatters out of the bags by tying hundreds of strands of the white material on the ends of sticks. Even in the most remote parts of southern Sudan, you can find naked herd boys carrying these pom-pomesque switches to chase away the flies.

One of the other most popular pieces of packaging is the vegetable oil tin. The one-gallon cans from the US Agency for International Development say in big letters, `USA refined vegetable oil, vitamin-fortified.' South Sudan has been so cut off by the last two decades of war that there's very little metal available. The oil tins are molded into funnels, used as small hibachis and, at several outdoor schools, serve as chairs for the smaller students.

Also in the Rumbek market, 50-gallon drums are forged into spears, knives and hoes. The ubiquitous brass casings from AK-47 bullets are polished and strung together as noisy necklaces for cattle.

One of the most ambitious recycling projects, however, in Rumbek is going on out at the airstrip.

BEAUBIEN: In January of 2003, a aging British transport plane came in a bit too fast for a landing and skidded across the gravel runway on its belly. For several years, the plane's upturned wing served as an unofficial departure lounge offering shade to anyone waiting for a flight. A few months ago, the World Food Program began to lengthen the runway and, as part of the construction project, towed the wreck away from the airstrip. That's when Kristo Mamud(ph) decided the Andover 748 would make excellent pots.

Mr. KRISTO MAMUD: I use this metal, because these are special for making as cooking pot, ...(unintelligible). These are making a good cooking pots.

BEAUBIEN: Mamud and three boys are hacking the fuselage apart with axs. The twin-propped Andover is a fairly large plane for the Rumbek airstrip. In a different configuration, it could carry 42 passengers. Mamud figures that melted down, it should make several hundred small caldrons.

Mr. MAMUD: This section will make a ...(unintelligible) cooking pot.

BEAUBIEN: After they chop off sections of the plane, they melt the pieces over an open fire. They use the bellows made of a pipe in a large plastic bag to heat the metal to its melting point, and then pour it into homemade bowl-shaped molds. When they're done, what was once an example of Britain's post-war aviation prowess will be used to cook porridge and goat over smoldering campfires. Jason Beaubien, NPR News.

SIMON: You're listening to WEEKEND EDITION from NPR News.