Accessibility links
A Historical Perspective of Memorial Day Memorial Day emerged from the U.S. Civil War as a day of remembrance for service men and women who have died for this country. Since then, the significance of the day has fluctuated with public opinion. Matthew Dennis, history professor at the University of Oregon and author of Red, White and Blue Letter Days: Identity, History and the American Calendar, offers some historical perspective.

Memorial Day emerged from the U.S. Civil War as a day of remembrance for service men and women who have died for this country. Since then, the significance of the day has fluctuated with public opinion. Matthew Dennis, history professor at the University of Oregon and author of Red, White and Blue Letter Days: Identity, History and the American Calendar, offers some historical perspective.

We wanted to gain a little historical perspective about this day, so we asked Matthew Dennis, a professor of history at the University of Oregon and author of "Red, White and Blue Letter Days: A History of American Public Holidays," to join us.

Professor, thanks for joining us. Appreciate it.

Professor MATTHEW DENNIS (University of Oregon): Good to be with you.

Prof. DENNIS: Yeah. It was called Decoration Day, and the reason for that is because it was a day on which Americans, South and in the North, would decorate the graves of soldiers who died in the Civil War--you know, just a devastating event, and a, you know, vernacular, grassroots kind of expression of mourning.

GORDON: When did it become more official, if you will?

Prof. DENNIS: Well, you know, what's interesting is the reason it's so important is because it really came from people themselves, but it was officially recognized as a national holiday by 1889 in an act of Congress. And, you know, it spread especially through the North by then. It would take hold in the South as an official holiday, you know, about the same time, but in a slightly different way.

GORDON: It's interesting to note that Memorial Day, Veterans Day, obviously during times of war, unfortunately times of which we are in right now--it seems these holidays, in terms of people's observance of them, is heightened. Was there, is there a particular year where this was most observed, if you will?

Prof. DENNIS: Well, you know, I think you're right that in times of war, we see these expressions heightened, you know, and in times of peace Americans quickly forget. I mean, that's one of the ironies about Memorial Day. It's a day of memory, yet we tend to forget, and, you know, very quickly, the idea that it was connected with this devastating event, the Civil War--what was forgot. In 1888, even before it was declared a national holiday, President Grover Cleveland was criticized for going fishing on Memorial Day instead of, you know, visiting graves or participating in other sorts of rites.

Prof. DENNIS: Memorial Day was a holiday that emerged after the Civil War. Veterans Day started as Armistice Day, which was a holiday trying to commemorate the end of World War I. Of course, the armistice was signed at the 11th hour on the 11th day of the 11th month in 1918. And by 1919, it became a new holiday. Ironically, really, or strangely, rather, it kind of obliterated Memorial Day. It some ways it did the same sort of commemorative work as Memorial Day itself, and in some ways, it's another example of Americans, in a way, forgetting that they already had a holiday that mourned the loss of soldiers and was, at least initially, a holiday dedicated to peace. But because veterans' organizations were the major constituencies and because of the way that the world was changing so rapidly in the 20th century, that was transformed, really, into a holiday that celebrated not peace so much but the warriors, and it became--by 1954, it was renamed to become Veterans Day.

GORDON: Why do you think that we have lost, to some degree, the idea of saluting these fallen soldiers? As we heard earlier in our program, many people simply see this as a day off or an opportunity to buy electronics on sale, things of that nature.

Prof. DENNIS: Well, you know, I think Americans generally have, you know, tried to avoid the idea of death and it's been receding, kind of, in American culture for a long time. I think we also live in a consumer society, a society that defines itself more on leisure and consumption than on production. I think we don't really have the same kind of, you know, consciousness that, you know, is maybe characteristic of an earlier time. But even at an earlier time, I think Americans generally have looked not so much to the past, but to the future, and haven't been particularly historically minded. You know, to me, it's just astonishing that Memorial Day was--ended up becoming kind of a generic holiday of--to mourn death generally, and what was forgotten in some cases was why the Civil War was fought.

So it became a kind of therapeutic holiday so that the two sections of the country, North and South, could reconcile and forget what they were really fighting about altogether, which meant that the true cause of the war, and the true purpose of the war, to achieve especially racial equality, was forgotten altogether. And we see a kind of willful amnesia that left African-Americans out and refused to finish the work of reconstruction, delaying real equality in this country, or the beginnings of it, until the civil rights movement in the mid-20th century.

GORDON: And to a great degree, it's my understanding that that is why Memorial Day was not observed, necessarily, across the country by some.

Prof. DENNIS: Yeah. And then to the extent that it was, it became these kind of rites of reunion, as some historians have said: joint ceremonies of Northern and Southern soldiers, the blue and the gray together, but leaving out any kind of sense that what they were fighting about really mattered. And so people would just agree to forget on Memorial Day, to go forward in a way that just left some Americans, African-Americans, behind.

GORDON: Matthew Dennis is a professor of history at the University of Oregon and author of "Red, White and Blue Letter Days: A History of American Public Holidays."

Thanks so much for joining us.

Prof. DENNIS: Nice to talk to you. 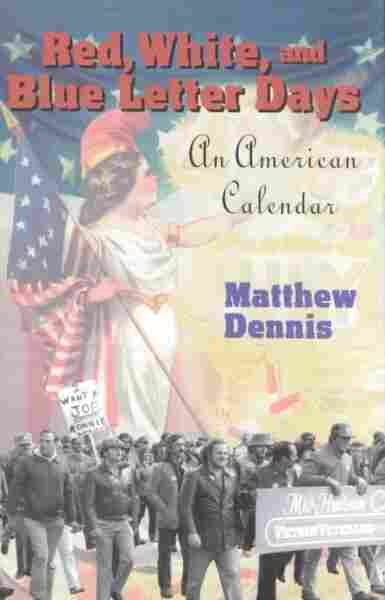