Accessibility links
Wolfensohn Refocused World Bank's Mission James Wolfensohn steps down as president of the World Bank Tuesday. Over the past decade, Wolfensohn revamped the way the lending institution did business, switching to a country-based, hands-on approach that focused more on human development, health and education projects in the battle against poverty. 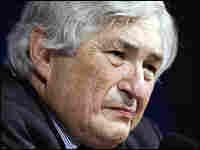 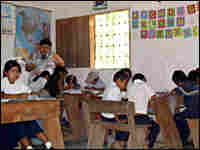 This school in Copan, Honduras, is one of more than 1,000 community-based schools built in the country under Wolfensohn's policies, which focused on fighting poverty in part through human development. Students here learn Spanish and their native language. Kathleen Schalch, NPR hide caption 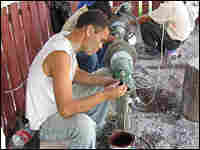 In Copan, a major Mayan archeological site, the World Bank has funded grinding machines for local artisans to make Mayan-style jewelry for tourists. It's part of an effort to foster both development and cultural pride. Kathleen Schalch, NPR hide caption

Honduras country manager Joe Owen discusses how the World Bank's approach to growth and poverty has changed over the years.

James Wolfensohn steps down as president of the World Bank Tuesday. Over the past decade, Wolfensohn revamped the way the international lending institution did business, switching to a country-based, hands-on approach that focused more on human development, health and education projects in the battle against poverty.

When Wolfensohn took over, the World Bank was a 50-year-old institution that was dispirited and under siege. Pointing to the private capital surging into developing countries, critics on the right said bank lending was wasteful and no longer needed. Critics on the left said the bank was doing more harm than good, accusing it of everything from funding ill-considered roads and dams, and prescribing overly harsh austerity measures, to committing environmental depredation and cultural genocide. Many demanded that the bank simply be shut down.

Wolfensohn believed it could be transformed. He worked to break the bank out of its old habits of crunching numbers and meeting with finance ministers, and train its sights on understanding and dealing with the crushing burden of poverty. He hired anthropologists and experts on biodiversity and gender, listened to the bank's critics, and thrust the bank into the battles against corruption and AIDS in developing countries.

"I think he's taken an institution that always had a phenomenal brain but had less of a heart and soul, and I think he's given it that heart and soul," says Caroline Anstey, a longtime Wolfensohn aid and World Bank country director for the Caribbean.

Critics say Wolfensohn gave the World Bank an overly broad focus. A new internal review by the bank's Operations Evaluation Department says the bank should go back to acting more like a bank, concentrating more on funding infrastructure and spurring economic growth.