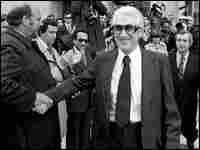 The Origins of 'Deep Throat'

An excerpt from 'All the President's Men,' introducing the source known as "Deep Throat."

Woodward had a source in the Executive Branch who had access to information at [the Committee to Reelect the President] as well as at the White House. His identity was unknown to anyone else. He could be contacted only on very important occasions. Woodward had promised he would never identify him or his position to anyone. Further, he had agreed never to quote the man, even as an anonymous source. Their discussions would be only to confirm information that had been obtained elsewhere and to add some perspective.

In newspaper terminology, this meant the discussions were on "deep background." Woodward explained the arrangement to managing editor Howard Simons one day. He had taken to calling the source "my friend," but Simons dubbed him "Deep Throat," the title of a celebrated pornographic movie. The name stuck.

At first Woodward and Deep Throat had talked by telephone, but as the tensions of Watergate increased, Deep Throat's nervousness grew. He didn't want to talk on the telephone, but had said they could meet somewhere on occasion.

Deep Throat didn't want to use the phone even to set up the meetings. He suggested that Woodward open the drapes in his apartment as a signal. Deep Throat could check each day; if the drapes were open, the two would meet that night. But Woodward liked to let the sun in at times, and suggested another signal...

When Woodward had an urgent inquiry to make, he would move [a flower pot with a red flag to the rear of his balcony.] During the day, Deep Throat would check to see if the pot had been moved. If it had, he and Woodward would meet at about 2:00 A.M. in a predesignated underground parking garage...

The Washington Post has confirmed that the infamous secret source known as Deep Throat is a former FBI agent. W. Mark Felt, the No. 2 man at the bureau during the contentious Watergate investigations, was revealed as the source in an article in Vanity Fair released Tuesday.

Post reporters Bob Woodward and Carl Bernstein had long vowed to keep the source's name a secret until his death. The revelations from Felt fueled the pair's reporting during a tumultuous time that resulted in the resignation of President Richard Nixon in August 1974.

The Post's executive editor at the time, Ben Bradlee, said tonight that Felt's senior position at the FBI meant, "I knew the paper was on the right track."

In an article on the Post Web site, Woodward acknowledged the central role Felt had played. He aided the disclosure of crimes orchestrated by President Nixon's inner circle -- from the break-in at Democratic headquarters to electoral fraud and a conspiracy to cover up their crimes.

California lawyer John D. O'Connor befriended Felt, now 91, and wrote an article for the July issue of Vanity Fair. Felt had previously denied that he had been Woodward's source.

But O'Connor wrote that on several occasions, Felt told him, "I'm the guy they used to call Deep Throat."