Accessibility links
Keep the Smoke -- and Add Mirrors When he's not working 24-hour shifts at the firehouse, David Rudd turns to magic, performing for crowds at parties and clubs. Instead of air-tanks and hoses, his tools are playing cards.

Keep the Smoke -- and Add Mirrors

Keep the Smoke — and Add Mirrors

Keep the Smoke -- and Add Mirrors 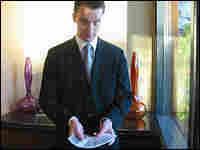 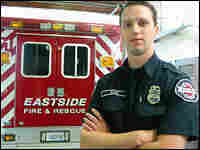 Firefighter David Rudd, a man you can trust, outside his rig in Issaquah, Wash. Ketzel Levine, NPR hide caption

The guys at the firehouse know he's always doing something with cards. What they may not know is that he's training to become a magician.

When David Rudd is not working 24-hour shifts as a professional fireman, he is perfecting his magic, and performing at parties. His theatrical persona borrows heavily from his day job as he creates the role of the Magic Fireman: the all-American guy next door you can't help trusting, even as he wows you with his sleight of hand.

David Rudd is the first to tell you he's still an apprentice, leaning heavily on the expertise of his mentor, magician Jamy Ian Swiss. Together, they work on his scripts, his tricks and his body language. Rudd is constantly tweaking, changing and perfecting his act.

David Rudd the firefighter is no actor. He's been a professional fireman for a decade. After spotting a recruitment sign in his early 20s, Rudd went to a fire academy, became an emergency medical technician, and scored high on months of tests before finally landing his job.

At 34, David Rudd makes a solid, stable living. No magic there. But if he handles his cards well, he may soon completely recreate himself -- poof! -- in a new career.