Accessibility links
A Look at Why No Two Ballparks are the Same Baseball is full of rules and regulations, yet it seems that no two outfields are exactly the same. Why is it, for instance, that it's 314 feet down the right-field line in Yankee Stadium, but 326 feet in Seattle?

A Look at Why No Two Ballparks are the Same

A Look at Why No Two Ballparks are the Same 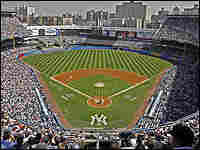 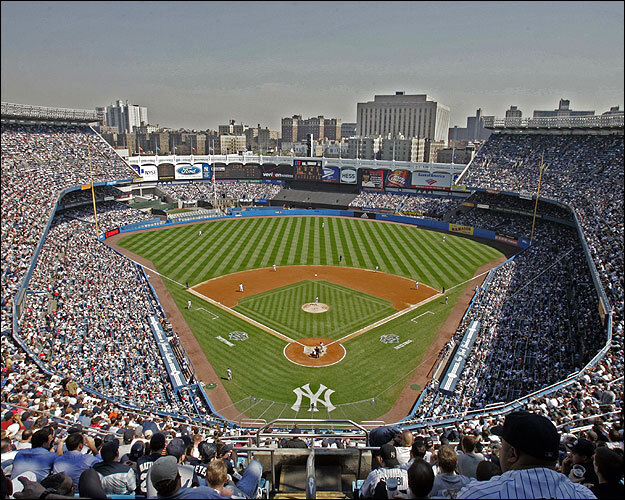 Yankees Stadium, "The House that Ruth Built," is perhaps the most storied of baseball's aging cathedrals. 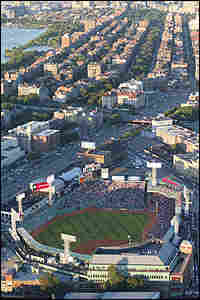 An aerial view of Fenway Park shows how it nestles into the surrounding neighborhood. Early stadiums took on odd dimensions as a result of being squeezed into their environs. Courtesy of Red Sox Media Relations Department hide caption 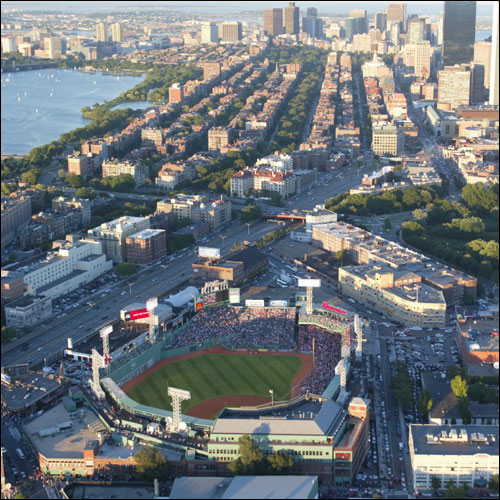 An aerial view of Fenway Park shows how it nestles into the surrounding neighborhood. Early stadiums took on odd dimensions as a result of being squeezed into their environs. 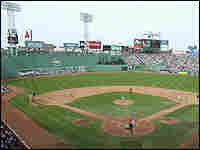 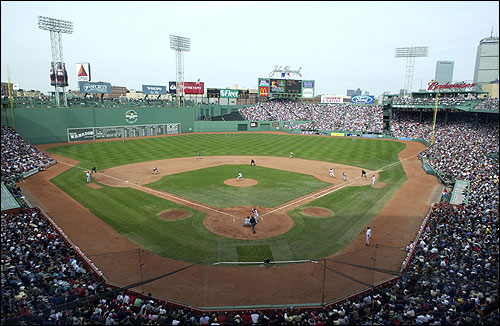 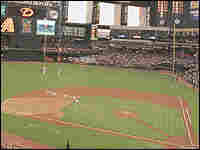 Bank One Ballpark in Phoenix is an example of a new stadium built to resemble an old ballyard. Note the dirt path from pitcher's mound to home plate. Courtesy Arizona Diamondbacks hide caption 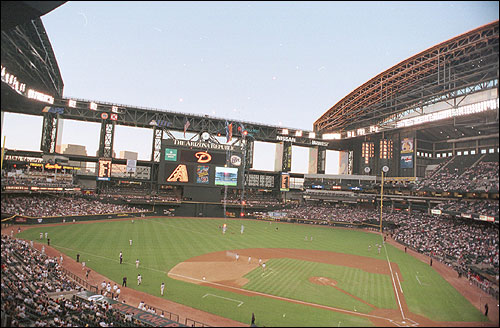 Bank One Ballpark in Phoenix is an example of a new stadium built to resemble an old ballyard. Note the dirt path from pitcher's mound to home plate. 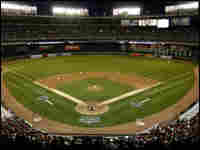 RFK Stadium in Washington, D.C., is home to baseball again after an absence of more than three decades. But there are plans to replace it with a new stadium built to look like a comfy old park. Mitchell Layton hide caption 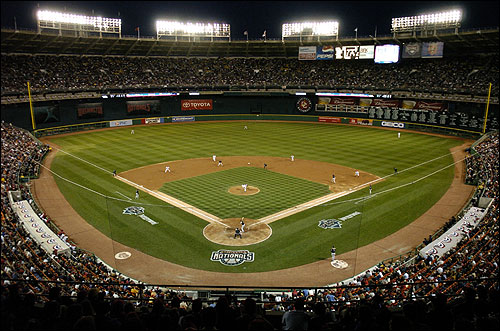 RFK Stadium in Washington, D.C., is home to baseball again after an absence of more than three decades. But there are plans to replace it with a new stadium built to look like a comfy old park.

When it comes to sports, I am not what you'd call a fan. I don't know much about the different rules or regulations. So you'll rarely find me yelling at referees or criticizing their mothers' profession (at least that's the way they do it in Israel). Did they make a fair call? How would I know?

But one thing I clearly understand is that there are rules. And working within the constraints is part of the glory of the game. And in almost every team sport I know, one consistent element is the size of the field.

An American football field is 100 yards long. A basketball rim hovers 10 feet off the ground anywhere you go, from Australia to Zanzibar. And when they run "the mile," they run a mile. They don't call it "the mile and then since we're here in Oslo, let's add that last little bit over to the corner of the grandstand."

Baseball respects that tradition... up to a point. It's 90 feet from home plate to first base and 60-feet-six inches from the pitcher's mound to home plate. But I was puzzled to discover that ballparks -- and particularly outfields -- come in all shapes and sizes. As Philip Bess, graduate director of the University of Notre Dame School of Architecture, and author of the book City Baseball Magic: Plain Talk and Uncommon Sense About Cities and Baseball Parks explained to me: "Nobody sat down and said, 'We're going to make all the ballparks the same.'"

And so part of the glory of Boston's Fenway Park is the Green Monster, that towering wall in left field. Nobody reaches over the top of the Monster to snatch away a home run. Yet over in right center field in the same ballpark, the bullpen wall is short enough to take an outfielder's legs out from under him as he's speeding for a catch.

Still, I wanted to know more. Why is it, for instance, that it's 314 feet down the right-field line in Yankee Stadium, but 326 feet in Seattle?

It turns out that Major League Baseball and Minor League Baseball do have rules concerning dimensions of the outfield, but they allow ballparks to remain distinct. In the majors, parks which opened before June 1, 1958 (you can count those on a few fingers now) are required to have outfields large enough to make the distance from home plate to the base of the left and right field foul poles a minimum of 250 feet. That saves Yankees Stadium. But the distance for ballparks opened after that date requires bigger dimensions: 325 feet down each foul line and at least 400 feet to center field.

It didn't take me long to realize that baseball fans don't see the different dimensions as a problem. Au contraire. It's one of the things they love about the game.

Bob Mandazi, 50, from Anchorage, Alaska, has visited hundreds of ballparks, and loves to compare the different venues. "To me, that is part of the charm. I appreciate the differences in the dimensions, in the architecture, and the variety," he says.

"My favorite ballpark," he reminisces, "is a minor league park in Bridgeport, Conn. There is a big bridge in the left field, and a train that passes on the right field -- it's a show just to be there."

Others noted that the challenge of playing at different fields forces athletes to adapt to new locations, and in some cases to adjust their games.

Alan Gold, 53, from Philadelphia, Pa., grew up going to games at Yankee Stadium in New York. "The fact that the ballparks are different adds character, and they are indicative of their location."

One reason parks are so different is that they were built in a variety of baseball eras.

There are basically three types in the country today: the old ballyards, built between 1909 and 1923; sterile suburban stadiums built after WWII, and lately, the retro parks designed to look and feel like old venues with odd quirks, but also with modern conveniences.

"Originally baseball was played as a game, and not a business, so there was no need to enclose the field," explains Bob Bluthardt, chairman of the ballparks committee for the Society for American Baseball Research. It was around the 1860s, that several entrepreneurs realized that a secluded playing field, where they could monitor the crowd, could be a moneymaking production.

Notre Dame architecture professor Bess said that throughout this period, the infield in all ballparks was always the same -- an area strictly defined by the 90-degree arc -- but outfields tended to be vast. "During these times there were no home runs," Bess said. At least no home runs landing in the stands.

As baseball became increasingly popular in cities and professional leagues formed, ball diamonds were wedged into neighborhood parks, negotiating networks of streets and blocks. In the urban area, each slot of land was different, and the field had to conform to the shape of the block. Fenway Park, Yankee Stadium, and Wrigley Field are the only dinosaurs remaining from the epoch of old neighborhood ballparks.

After 1945, and the advent of suburban sprawl, stadiums were set off on super blocks. These large parcels of land, planned for use ahead of time, offered few constraints. They were surrounded by vast parking lots as streetcars gave way to the automobile. And most importantly, the stadiums tended to be for multi-purpose use -- for football as well as concerts and occasionally other sports. Many believe baseball was the big loser as parks like Riverfront Stadium in Cincinnati and Three Rivers Stadium in Pittsburgh -- round, nearly identical and devoid of design quirks -- began to dominate the scene.

Bess believes the suburban parks simply lack character. "I like the irregular dimensions in ballparks," he says. "What makes them best is when they are a product of urban constraint. I like ballparks that are in neighborhoods because they give a special character to the neighborhoods and to the community."

Tradition. One of my first lessons in baseball was that that tradition is key. You don't want to mess with it.

So, during the 1970s and 1980s, fans trudging into perfectly designed, utterly bland stadiums were hit with a wave of nostalgia for days gone by. And the "retro" park was born. Still built on super blocks, the new designs tapped into the yearning for the past. They arrived with a flurry: Camden Yards in Baltimore. Jacobs Field in Cleveland, which even came with a ready-made "old school" nickname: The Jake.

Bluthardt says the third wave of ballparks has also allowed teams to take advantage of the non-uniform dimensions by building fields that correspond to a team's strengths and weaknesses.

Now, is that fair? Not for me to say. I don't know much about the rules, remember? But my editor will tell you... and tell you... and tell you... that it's really just a variation on something as old as baseball. Teams with lots of speed and base-stealing threats arrived to batters' boxes and baselines that had been doused with water to slow them down. Outfield fences were adjusted from year to year to take advantage of the home team's relative home run power... or lack thereof.

Besides, those odd dimensions have had a significant effect on some of the most important games in baseball history. Willie Mays' over-the-shoulder catch of Vic Wertz's deep fly in the 1954 World Series -- one of baseball's most memorable moments -- would not have happened in a different ballpark. The vast expanse of the Polo Grounds allowed the fleet Mays to take away a certain extra-base hit. In most parks the ball would have landed 50 feet deep in the stands.

Bluthardt says such differences are often meaningful. "Baseball is a game where the winning team hits the ball farther," he says. "If you change the space where the ball is caught and hit, you change the dynamic of the game. If you have a ballpark which is 10 to 30 feet shorter than another ballpark, over time it is going to have a certain effect."

Fan of the game Ben Larson, 22, of Mercersburg, Pa., sees the idiosyncratic nature of ballparks as perfectly fair. Everybody gets a chance to take advantage of their own situation. "The teams play 162 games a season -- half of them at home -- and half at other fields," he points out. "This is their home field advantage."

All is fair in love and war, so they say. And apparently, that's true in baseball, too.